Boca Juniors against River Plate is one of the world’s great derbies, maybe the greatest 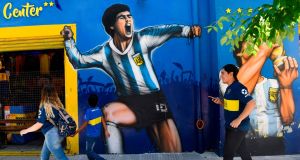 The La Bombonera stadium in Buenos Aires where millions of football mad fans in Argentina are eagerly counting down to the first ever “superclasico” Copa Libertadores final. Photograph: Getty Images

Pepper spray in the tunnel, an inflatable pig floated in front of the away fans, Carlos Tévez being sent off for performing a chicken dance … take your pick: the superclásico has an almost inexhaustible store of anecdote, ranging from the bizarre to the tragic, the wackiness of the image often disguising the menace that lies beneath.

Boca Juniors against River Plate is one of the world’s great derbies, maybe the greatest, and there is perhaps something appropriate about the fact that the last two-leg final of the Copa Libertadores will see these two most celebrated of rivals go head to head.

The stadiums, themselves shabby, atmospheric, dripping with history, may only be eight miles apart, but no away fans will be allowed at either leg. Those are eight critical miles, a journey that not only takes you past the Planetarium, outside which the first football match was played on Argentinian soil by British Freemasons in 1867, but represents the distance River travelled from their origins in the same docks as Boca to leafy Núñez. They are the immigrants made good, the rivalry cast as working- against middle-class, the sweat and industry of Boca against the style and artistry of River.

The decision to ban away fans was inevitable. It was only in August that away fans began to return to Argentinian league games after a five-year ban, and then not in games involving the five grandes. The risk is simply too great.

The incident in 2012 when River fans delayed the start of the second half of a superclásico by floating an inflatable pig in Boca colours in front of away fans tended to be played for laughs, but it was a factor in the violence that followed as stewards were dragged to the top of the terrace and hurled down flights of stairs. (Boca are known as “los bosteros” because of the piles of manure – bosta – used in the brick industry that used to dominate the area where their ground now stands.)

Last time the teams met in the Libertadores, in the last 16 in 2015, the second leg had to be abandoned after pepper spray was released in the tunnel at la Bombonera, causing severe problems for River, who were subsequently awarded the game.

Tévez’s dance also came in the Libertadores, in the semi-final in 2004, the latest stage at which the sides had met in the competition until now. That was a tie that lived up to every expectation and more.

Boca won a tempestuous first leg 1-0, a game in which Marcelo Gallardo, the current River coach, was sent off along with Boca’s Raúl Alfrédo Cascini.

Boca had Fabián Vargas sent off just after half-time in the return before Lucho González levelled the tie. Rubens Sambueza was then sent off for River, a decision that provoked such anger that their coach, Leo Astrada, his assistant and the physio were dismissed. When Ricardo Rojas limped off with all three substitutes having been used, River were left to battle on with nine men.

That looked decisive when Tévez smashed in a cut-back from the left with six minutes remaining. But he was sent off after celebrating by removing his shirt and flapping his arms by his sides – a reference to River’s reputation as gallinas, chickens, a nickname they acquired in 1966 after Banfield fans threw a live chicken on to the pitch to taunt them for losing a Libertadores final play-off against Peñarol after being 2-0 up, the latest in a string of chokes. Cristian Nasuti equalised in injury time and, away goals not being applied in those days, sent the game through extra time to penalties, which Boca won.

Realistically, these sides are nowhere near the quality of the teams in 2004, although Tévez, now 34, is back at Boca and helped them to the league title last season. With around 40 per cent of this season gone, though, Boca lie eighth and River, who won 2-0 at la Bombonera in September, 10th. In a sense, though, that matters far less than the spectacle. That Boca went on to lose the final to Once Caldas in 2004 is an afterthought everywhere outside Colombia; what sticks in the mind is the semis.

River, frankly, are fortunate to be in the final. Gallardo was banned from the touchline for the second leg of their semi-final against Grêmio for sending his players out late after half-time in the first leg, but, pulling his collar up and his baseball cap down, he made his way to the dressing room at half-time, aided by the fact that River had travelled to Brazil with their own security, who kept Conmebol officials back. Throughout the game Gallardo had also been in constant radio contact with his assistant Matias Biscay on the bench.

Whatever he said at half-time had a remarkable impact. One-nil down from the home leg in Buenos Aires, River had conceded a second in the first half in Porto Alegre. It remained 2-0 on aggregate until the 81st minute, when Rafael Borre pulled one back. Then, four minutes into injury time, a penalty given after a VAR review for a far from clear-cut handball allowed Pity Martínez to score an away-goals winner.

Grêmio appealed. Last year the Uruguayan side Danubio were awarded a 3-0 walkover win in a league game against Sud América for a manager failing to obey a touchline ban, but that was a decision made by the Uruguayan football federation. Conmebol’s rules on the subject were not clear. Grêmio pointed out that Santos and Deportes Temuca had had matches awarded against them by Conmebol this season for fielding ineligible players – but a manager is not a player.

Remarkably, River had fielded an ineligible player in the last 16 this season, Bruno Zucculini being included against Racing despite having failed to complete a suspension from 2013, but they got away with it because their opponents failed to file their appeal within the mandated 24-hour window: the Libertadores, where utter mayhem coincides with really quite stringent bureaucracy.

Gallardo’s was not a technical breach. With planning and care, he set out to circumvent the ban. Although River deny prior knowledge, Conmebol’s regulations were treated with contempt. Gallardo has been fined $50,000 and suspended for a further three games, but it’s hard to avoid the conclusion that River have got away with it.

But then, what did justice weigh against the prospect of River at la Bombonera on Saturday and Boca at el Monumental two weeks later? For 58 years South America has been waiting for this, the climax of all climaxes. Who would be the man who stopped the superclásico final?