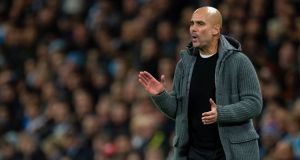 Pep Guardiola: there has been a clarity to City’s project, aided by his arrival, in contrast with United’s own wildly oscillating progress post-Ferguson. Photograph: Peter Powell/EPA

If the rise of Manchester City is anything to go by, all it takes to create an era of generational club football dominance is €2.3bn, the greatest manager of the modern age and the fevered dreams of an oil-rich Gulf state. It is a 10-year plan that has come into sharper focus this week, in a way that draws the eye back as well as forwards.

Sunsay’s Manchester derby at the Etihad Stadium will mark 10 years to the month since the first of these modern Manc clásicos in November 2008, 10 years on from the birth of City 3.0 under the club’s Emirati owners.

It feels like an even more poignant anniversary given the sudden focus on those first five years, when a huge standing-start investment was required to ratchet up the playing squad to instant-contender status.

How do you get from there to here? From a team of mismatched likely lads to the current sleekly engineered machine? It remains a good question, and a poignant one at the end of a week when phrases such as Operation Longbow and “closed payment loop” have entered the football vernacular via the ongoing leak-based investigations into City’s finances.

According to Der Spiegel’s reports the true spend on the team in those first four years was around €1.26bn, a figure that will either draw cheers and high fives or a clutching of the pearls to the throat depending on your view of financial fair play rules and, more likely, your club colours.

At which point the screen dissolves, wind chimes tinkle and we head back almost exactly 10 years to the first of those new-age derbies. By November 2008 City had taken their first baby steps under the ownership of Thaksin Shinawatra, who helped fund a period of energetically mismatched recruitment during his year in charge.

The Abu Dhabi takeover was completed on September 1st 2008, awarding Thaksin, who is currently a fugitive from the Thai authorities, a €137m profit in the process.

The first few days of Abu Dhabi ownership were giddy. There was a failed last-ditch bid to gazump United’s move for Dimitar Berbatov. Eager to rid themselves of the terrible burden of disposable income ,City barfed up €36m for Robinho, just as Chelsea were preparing to start selling shirts with his name on the back.

Robinho would ultimately score 14 goals in English football, moan about the cold and leave a year later for half that fee. But back in November 2008, at the stadium still known as Eastlands, he was the focal point of an aspirational and frankly quite weird front three alongside Benjani and Darius Vassell.

Behind him were Stephen Ireland, Shaun Wright-Phillips and Dietmar Hamann. Vincent Kompany started in central defence and remains the only player in either squad likely to feature tomorrow afternoon.

United were the reigning champs of Europe. They could field Berbatov, Cristiano Ronaldo and Wayne Rooney as a front three and still keep Carlos Tevez in reserve. At Eastlands Rooney would score the only goal of the game, tapping in just before half-time after Joe Hart could only parry Michael Carrick’s drive.

From that point United were comfortable enough, although Ronaldo was sent off in the second half for a bizarre handball at a corner, a last significant act before he won his first Ballon d’Or three days later.

The result, Rooney said afterwards, reminded everyone “who the real kings of Manchester are”. The BBC agreed, noting that United’s dominance “perfectly illustrated the gulf in class between the two sides that City’s wealthy new owners Abu Dhabi United are hoping to narrow”.

Sky Sports was a little more prescient, the web report suggesting “City’s vast wealth makes this a fixture which is sure to be even more keenly fought in the future”.

Fast forward 10 years and that coltish, mismatched City team seems entirely unrelated to the current high-spec model. Sven-Göran Eriksson would later observe that Shinawatra “knew absolutely nothing about football”, and even in those early months the contrast with the irresistible will of the new regime was striking; from the statement-signing of Tevez for €53m seven months later, to the arrival of David Silva and Yaya Touré the year after that.

There has been a clarity to City’s project since then, and a contrast with United’s own wildly oscillating progress post-Ferguson. From the early signs of a coherent playing system being winched into place, to the carefully staged hiring of Pep Guardiola – contract signed a year ahead of time Der Spiegel now tells us – this is a team that always seemed to be heading one way, gearing itself at each stage towards the current version.

Given City’s strength now, even a two-point lead at the top of the Premier League looks like an ominous little kick away from the pack.

Chelsea and Liverpool have kept pace so far. But City are still ahead on every metric: most points, most goals, most shots, most dribbles, most possession, best pass accuracy.

No one has more assists than Raheem Sterling and Benjamin Mendy. No one has more goals than Sergio Agüero. No one has a higher pass completion rate than John Stones, a stat that feels less meaningless than usual given the tactically vital nature of City’s play from the back.

United have shown a great resilience in the last few weeks, not least on Wednesday night in Turin. But 10 years on from Gulf state D-day it is the visitors whose playing squad still looks a little piecemeal, hurled together by a succession of disconnected regimes.

Going into tomorrow’s trip to the Theatre of Dirhams, United have still won only once away to last season’s top four in the José Mourinho years. That win was at the Etihad last April when Paul Pogba scored twice, and when Kevin De Bruyne was also absent, coming on only when City were losing.

Still, though, the shift in playing strength between these two clubs is still clearest in those central areas, where a United squad packed with tall, angular footballers will engage with City’s fluid, mobile midfield like a platoon of Cybermen chasing a litter of kittens.

United will look to disrupt and sit deep, as they did successfully against Juventus, and to use their own power on the break and from set pieces.

But 10 years on it is a mark of changing times, and of the absurdity of big football finances, that a victory for the most profitable football team in the world could almost feel now like a blow struck for the little man.

Man United’s latest Parisian party more impressive than heist of 2019 09:45
Lions to play Japan on home soil before tour to South Africa 09:26
Tiger Woods in the groove as he plots a path to Augusta 09:22
No underage or minor GAA to be allowed under Level 5 Covid-19 restrictions 08:53
Ole Gunnar Solskjaer hails players after win over PSG 07:57