The Dubliner played both rugby and Gaelic football before joining Sunderland 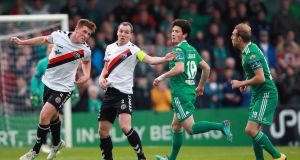 Cork City have made an early start to the process of rebuilding a side that has lost a number of prominent players in the wake of Sunday’s FAI Cup final with the announcement that 21-year-old central defender Dan Casey has signed from Bohemians.

The Dubliner, who played both rugby and Gaelic football at a high level before opting to pursue a career in professional football at Sunderland, returned home in the summer of 2017 and had excelled at Dalymount in the season and a half since.

“I’m delighted,” he said after the signing was announced on Tuesday. “Cork is a huge club and it’s definitely a good move for me. I think it’s going to be an exciting period in my career.”

John Caulfield said he was delighted to land the player, observing that Casey is “good on the ball, very strong in the air, aggressive and has huge potential. We need ambitious, hungry players and he fits that bill.”

Bohemians have also lost Ian Morris who has been both a player and the director of youth development at Dalymount Park but has agreed to succeed Owen Heary as manager at Shelbourne.

“Ian possesses all of the attributes we were looking for in a head coach,” said Shelbourne CEO David O’Connor. “His knowledge of the game is excellent and his work ethic, self-belief and leadership skills will be evident to everyone. He is a leader and a winner. He has captained several clubs during his career and has led teams to promotion as a player. Ian knows what it takes to be successful.”

Morris himself accepts the target will be to take the team up at the first time of asking. “Our aim is to get promoted next year,” he says. “This will be reflected in the players and staff that are committing to our club for next year and beyond. I am really looking forward to immersing myself in the role and am excited about what the future holds for the club.”