Brendan Rodgers says the rhythm in his Celtic team is back 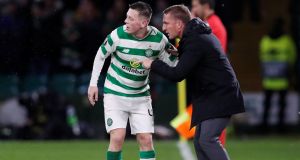 Brendan Rodgers insists his Celtic side are ready for any challenge as they prepare for the trip to Livingston on Sunday.

The Hoops are buoyant after their dramatic 2-1 Europa League win over RB Leipzig at Parkhead on Thursday night.

The result boosted the Scottish champions’ chances of qualification out of Group B but there is no respite as they return to Ladbrokes Premiership duty.

The Hoops have scored 23 goals in their last five domestic games and Rodgers is in confident mood.

The Northern Irishman said: “It is on to the next game now. We have shown domestically that our form and rhythm is now back in the team.

“It will be a difficult game for us at the weekend, we are playing on an AstroTurf pitch.

“But the beauty of this squad as I said, they take whatever challenge is next.

“We have to recover now because we put so much into the game but we will be ready for the game on Sunday.

“A difficult game against a team that has come up and started the season very well so we will give Livingston all the respect they deserve and it is then up to us to go and impose our way into the game.”

Celtic beat Livingston 3-1 at Parkhead in August when Kenny Miller was player/manager but Rodgers has been impressed with his replacement Gary Holt.

The former Liverpool boss said: “He has done a very good job.

“When we played them early on in the season you could see that maybe they were trying to play a different way.

“It looks like they have gone back to something a bit more like what got them promoted.

“So we know that physically we have to cope with set-pieces.

“Gary will have them very well organised, hard to beat so we have to be at our best again in a different way at the weekend to get the three points.

“But like I say we go into it with confidence, always respecting the opposition.”