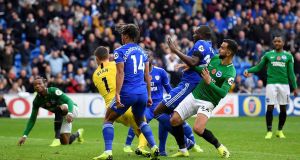 Neil Warnock took charge of his 100th game as Cardiff manager and there was plenty to celebrate as Sol Bamba scored a 90th-minute winner to overcome 10-man Brighton 2-1.

Warnock was among those jumping for joy as Bamba’s close-range effort – after Cardiff had twice struck the frame of the goal in a crazy six-yard box incident – took the Bluebirds out of the Premier League relegation zone before the later kick-offs.

It was not a new experience for Cardiff to be playing against 10 men, as Newcastle and Huddersfield had players sent off against them earlier this season.

Cardiff had let points slip in those goalless draws, but such profligacy was avoided this time in a frantic late goalmouth skirmish.

Bamba sent an overhead kick against a post before Paterson’s follow-up effort was deflected onto the crossbar by Dunk.

There was no third let-off for Brighton, though, as Bamba had clambered back onto his feet to thump home.

The afternoon had started so well for Brighton with Dunk marking his call-up to the England squad by heading home Solly March’s sixth-minute free-kick.

Dunk had scored only once in his first 47 Premier League appearances, but the centre half made it two in as many games when he lost Bamba at the far post.

Cardiff were sluggish throughout the opening quarter and March and Glenn Murray failed to extend Brighton’s advantage when well placed.

But Cardiff were level after 28 minutes when Kadeem Harris, who was making his first Premier League start, weaved his way into the penalty area.

Harris’s cross looped off Gaetan Bong and makeshift striker Paterson was the willing recipient as he headed in his third goal in four games from close range.

Joe Ralls saw his volley held by Mathew Ryan but Cardiff were given an open invitation to get on top when Stephens saw red.

The Brighton midfielder chased after a loose ball and sent Cunningham spinning into the air.

Although contact appeared minimal, it was undoubtedly dangerous and referee Martin Atkinson had no hesitation in brandishing a red card.

Brighton sacrificed March before half-time with Yves Bissouma sent on to bolster the midfield in Stephens’s absence.

Cardiff predictably dominated possession and territory after the break, but created little until Harris struck the crossbar with a curling 20-yard effort near the hour mark.

Brighton’s box came under increasing pressure, but Cardiff lost their skipper Sean Morrison after he suffered from a clash of heads when trying to help on Aron Gunnarsson’s long throw.

Morrison appeared to be dazed after receiving treatment, but he remained on the pitch for several minutes before being substituted – an incident the Football Association might yet investigate in relation to concussion protocols.

Brighton gave warning that they could still threaten when Jose Izquierdo forced Neil Etheridge into a full-length stop, but Cardiff’s perseverance paid off as Bamba secured their second win of the season.

Ian O’Riordan: Learning to run for the first time all over again 19:00
Davy Russell ponders what might have been for Tiger Roll 18:07
Cycling Ireland thrilled with take-up for Zwift League series 17:02
Racetrack organisation does not envisage any closures in the short-term 15:03
Coronavirus crisis could cost the GAA up to €60 million 14:19

1 Cheltenham faces criticism after racegoers suffer Covid-19 symptoms
2 My favourite sporting moment: Shels finally make all the heartbreak worth it
3 Sport will be last duck in the row in return to normality after coronavirus
4 Even 60 years on, French rugby tome still holds water
5 Coronavirus crisis could cost the GAA up to €60 million
Real news has value SUBSCRIBE