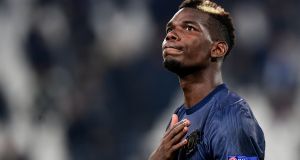 Paul Pogba: has been in improved form for Manchester United of late but is an injury doubt for the derby against City. Photograph: Miguel Medina/AFP/Getty

The midfielder has impressed for José Mourinho’s side in recent matches, the World Cup winner a key factor in United’s uplift in form.

United and Pogba have won their last three matches, including Wednesday night’s impressive 2-1 victory at Juventus but the Frenchman was unable to take part in full training on Friday. Instead Pogba undertook an indoors session at United’s training complex due to what is understood to be a “small injury”.

Mourinho’s squad have a final session on Saturday before the trip to City so the manager will hope Pogba can take part before any decision about his availability for the match is taken.

The United manager, meanwhile, wants his side to take the fight to the Premier League leaders in the derby.

United are nine points behind City after 11 matches as they travel to the Etihad but they are enjoying a fine week, having won at Bournemouth and Juventus, while last month they drew at Chelsea after leading until the closing moments.

Mourinho, asked whether the wish was to go toe-to-toe with Pep Guardiola’s team, said: “We are going to try. I cannot say we are going to be successful in our motivations, in our desire, but we played two different matches away against two very good teams – Chelsea and Juventus – and we managed to get good results.

“And even if the good results were not in our pockets the performances were there, the positive attitude was there so we are going to try but Manchester City are a very powerful team.”

Mourinho refused to be drawn on the alleged breaches of FFP rules by City but did praise their football operation.

“It is difficult for me to answer because I focus on my job, I focus on the four lines [pitch], focus on football. If you want to speak about their football potential we can speak and football potential starts with investment, and after that of course there is a quality of the work, of the organisation – I think that is untouchable.

Romelu Lukaku could be available again following a hamstring injury. Mourinho said: “Lukaku is training with the team this [Friday] morning. If his response is positive – and we have of course one more session tomorrow – he is ready.”

Meanwhile, Raheem Sterling has signed a contract extension at Manchester City and revealed how watching videos of himself has allowed him to become more ruthless in front of goal.

The forward, whose fresh terms ties him to City until 2023, scored a career-high 23 goals last season, including 18 in the Premier League. This season Sterling has registered seven in 14 appearances including three in his last two.

“It’s probably just not rushing, you see a goal and your eyes lights up and you kind of get giddy,” he told City TV. “With time and watching myself over on clips, I started to realise what I was doing in front of goal, I stopped rushing, taking my time and started being more ruthless and not thinking about it too much and do what you do every day on the training pitch.”

Sterling praised the influence of Mikel Arteta, Guardiola’s assistant, regarding his improvement.

“Not just for me, every player that has come in,” the 23-year-old said.

“He does individual bits with all the attackers. It’s not just Mikel, if you need something or they see something they will all [the coaches] come to speak to you about it. But they can only do so much, when you step on to the pitch you’ve got to replicate what you’ve been doing in training with these guys. But Mikel has been tremendous to work with.

“There’s definitely a lot more [to come from me], there’s stuff I’m still working on, there’s never a time where I feel this is where it stops, I always want to get better and get my numbers up, score more goals and get more assists. If I’m producing and other players are producing that will only help the team.”

Sterling welcomes the competition at the club, pointing to the summer recruitment of Riyad Mahrez.

“It is something that has really helped me as I’m always a guy who likes competition,” he said. “Not to say I’m better than you or silly stuff like that – it just pushes you to do more and not get complacent. We brought Riyad in this summer, there’s me, Leroy [Sane] in those positions and sometimes Bernardo [Silva] . You try to do as much as you can to give the manager a headache.”

Pep Guardiola believes Manchester United could still mount a strong title challenge even if they lose this weekend’s derby.

Guardiola’s Manchester City, the champions and current Premier League leaders, could open up a 12-point gap over their arch-rivals with victory at the Etihad Stadium.

But with United having enjoyed an upturn in results of late, Guardiola feels they will be in contention regardless of Sunday’s outcome.

“Win or lose they are not out. It’s not possible in November. They’ve already shown they can recover. They are a big club, with big mentality,” said the City boss.

“United have the history and always they are there. Maybe in March, April [you could say that] but everything can change at this stage.”

Guardiola recognises the derby as a special occasion for fans but does not want to overplay the significance of this particular game at this stage of the season.

He also points out that City lost the corresponding fixture last April but the bigger, more important, picture was that they were crowned champions a week later.

“All derbies are special. I think in Spain there is more noise than here but they are special, special for everybody. But we are in November. Maybe the game at Old Trafford [in March] will be more important.

“We’ve lost derbies and we were not able to win here. I understand how important it is but we played quite well and in the end we were champions. That is what counts the most and if we keep getting three points we’ll be champions again.

“It has never been easy for City to beat United and in the whole history Man United have won more times than City. But they’re a good rival and it’s a good chance to get three points and move them away.”

The derby will be Guardiola’s sixth since he took over at City in 2016 and will see him come up against old rival Mourinho once again.

The pair have a long-standing rivalry stretching back to their time as managers of Barca and Real Madrid respectively but Guardiola insists tensions have cooled since then.

There has been relatively little attention on the managers ahead of this weekend’s game and Guardiola likes it that way.

“Thank you so much for that,” said Guardiola. “We are both good guys, more than you expect. It’s much better, believe me.”

Guardiola, however, stirred the pot himself before the last derby in April by claiming before the match that City had been offered United midfielder Paul Pogba by the player’s agent Mino Raiola.

Pogba went on to play a starring role as United recovered from 0-2 down to win 3-2.

Asked if he regretted those comments, Guardiola said: “I don’t have too many regrets, that’s the question for his agent, his comments. It’s in the past. We lost. Every game is a new history and a new chapter.”