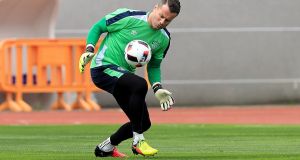 Shay Given has taken his first step into coaching. Photograph: Donall Farmer/Inpho

Derby County has confirmed that Shay Given has agreed to join Frank Lampard’s backroom staff ahead of the 2018/19 season.

This will be the Donegal native’s first coaching role since he ended his 23-year playing career at the climax of the 2016/17 campaign.

Speaking about Given’s arrival, Lampard told the club’s website: “I know Shay and his standing in the game as a goalkeeper and he’s right up there at the very top.

“He’s had many, many, years as a top goalkeeper. Performance wise he was incredible and he has now achieved his goalkeeper coaching license.

“I’m very pleased to have Shay as part of the team and not just for what he will bring as a goalkeeper coach, but what he will also bring to the dressing room in a much broader scheme.”

Given joined the Celtic academy as a teenager and his performances persuaded Kenny Dalglish to bring him to Blackburn Rovers, however he’s most recognised for his time to Newcastle United. He made over 450 appearances for the St James’s Park club before departing for Manchester City in 2009. He then went on to have spells at Aston Villa, Middlesbrough and Stoke City.

He earned 134 caps throughout a 20-year international career, during which he appeared at the 2002 World Cup and 2012 European Championships.

1 Suarez’ Italian language exam rigged according to prosecutors
2 What next for green jersey hero Sam Bennett after toughest of Tours?
3 Awarding of 2023 Rugby World Cup to France part of Laporte investigation
4 Gerry Thornley: Talk of Anglo-French hegemony is over the top
5 LeBron James has become this generation’s Muhammad Ali
Real news has value SUBSCRIBE
Crossword Get access to over 6,000 interactive crosswords