Controversial VAR system has proven its World Cup worth

System has corrected a couple of potentially costly, even group-altering errors 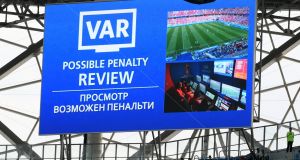 The big screen inside the stadium displays a VAR penalty review during the Group A match between Saudia Arabia and Egypt at Volgograd Arena in Volgograd, Russia. Photograph: Shaun Botterill/Getty Images

Never mind whether Serbia should have had a penalty when Stephan Lichsteiner and Fabian Schaer wrestled Aleksandar Mitrovic to the ground in Kaliningrad last Friday or Portugal shouldn’t have conceded one when Sardar Azmoun headed against a helpless Cedric in Saransk; some mistakes were made, as they used to say in these parts, but they would have been anyway.

Nah, VAR ended the debate about the value of its own existence 10 minutes from time in the game between Brazil and Costa Rica when Dutch referee Bjorn Kuipers was encouraged to take another look at his initial decision to give Neymar a spot kick.

The PSG star had gone to ground theatrically after the faintest of touches to his chest by Giancarlo González who was clearly appalled by the decision. Neymar did his best to look similarly put out when Kuipers returned from the pitchside monitor and indicated that he was overruling his original decision but the player knew that justice was being done.

It was a small thing – Costa Rica lost in the end anyway – and yet a wonderful moment, one to take home from this World Cup and cherish.

Okay, VAR generally has been a mixed bag but what did anyone expect? It is probably a tournament cycle away from being where it should be in terms of its development but Fifa were a little too keen to push on with its implementation and, to be fair, had it chosen to delay instead then the organisers here would be getting hammered instead for every single mistake that has been made when there was “a perfectly good way out there of making sure they didn’t happen”.

As it is, while VAR’s project leader here in Russia, Roberto Rosetti, says the aim is “minimal interference for maximum benefit,” it has sometimes seemed as though the net effect has actually been the other way around.

Exaggerating the extent of contact or inventing it completely is a generally accepted part and parcel of a footballer’s trade, it seems

But claims before we all got here by Gianni Infantino that it had upped the level of refereeing accuracy in trials from 93 to 99 percent always seemed likely to prove overly optimistic; the ambiguity over intent alone will probably prevent us ever reaching that level.

In reality, the teething problems are more glaring than might have been hoped but it has corrected a couple of potentially costly, even group-altering errors and that should surely be welcomed.

The level of actual uproar over the incidents it has not addressed is no great surprise, people do like to get outraged, and neither is the fact that VAR does not settle every debate, in football as in life they like to see things they way want to.

I watched the Spain –Morocco game the other night in the company of a Moroccan and a couple of Spaniards and guess what? When VAR was referred to and the late goal by Iago Aspas allowed they divided perfectly along lines of nationality. On the controversies in the night’s other game, showing in another TV in the same bar, it was all hands across the Mediterranean with the fans finding far more common ground or debating their differences of opinion a lot more rationally.

Ultimately the decision to allow Spain’s equaliser was a good but, honestly, who could have said without any degree of certainty before they had seen about 20 replays. The only thing I was completely convinced of until that point was that it must be a nightmare being a match official.

Group B, as it happens, produced a wealth of material for one of those expensively assembled study groups that Fifa like to get to review such things. From Diego Costa’s foul on Pepe to the Moroccan penalty claims in their game against Portugal to the mayhem of the other night, they will be able to put together a “highlights” reel that keeps everyone occupied until lunch.

Some of the calls involved were indeed poor but the people who made them aren’t helped by the fact that pretty much every professional player these days is the boy who cried wolf. Exaggerating the extent of contact or inventing it completely is a generally accepted part and parcel of a footballer’s trade, it seems; which is fine until you start hauling the townspeople over hot coals for not coming when it really mattered.

The players have also sought to influence the system in a way in which was not intended but was doubtless anticipated; by crowding around referees and urging them to have their decisions reviewed.

In fact, the way this is supposed to operate is that each and every “potentially match changing situation” – penalties, goals red cards and cases of mistaken identity – is reviewed by the VAR assistants on an ongoing basis and mistakes are then communicated to the referee.

Under obvious pressure, though, we have seen referees apparently second-guessing themselves and waiting for confirmation that they were right or wrong to come through before continuing with the game.

The day will surely come when that is no longer possible. Matches will at some point be refereed entirely remotely by officials employed by an outsourcing outfit who are a sponsor in a territory that has become strategically important to Fifa for commercial reasons.

Decisions will be communicated via PA system or big screen and players will bemoan not having somebody’s chest to poke when they have gone against them.

Between now and then, however, VAR will get better and make a positive impact and even by the time Qatar comes around we might be wondering what all the negative fuss was about four years ago.

1 Johnny Sexton aware of how Ireland can offer fans an escape
2 Gerry Thornley: After 32 weeks the Six Nations is back up for grabs
3 Stockdale and Ringrose on board with expansive Irish game plan
4 Extremes of sweet and sour for Solskjaer as Man United show signs of revival
5 Here is your handy guide to sport on television this week
Real news has value SUBSCRIBE
Crossword Get access to over 6,000 interactive crosswords