Have Southgate and England misread the draw?

Colombia are No 16 in the world, and reached the quarter-finals four years ago 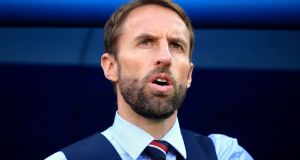 England manager Gareth Southgate: he had his own unhappy experience of not playing a minute at one tournament. Photograph: PA

And so on to Moscow. On an underpowered, slightly strange night in Kaliningrad England made it to the last 16 of the World Cup, an event that is worthy of celebration in itself. If there is a note of regret it is the manner of their progress, which came with the first minor misstep of what has been a positive sure-footed World Cup campaign.

The Kaliningrad Stadium is one of the smaller arenas at Russia 2018, a generic white bowl, like the bathroom suite of an ageing but perfectly respectable three-star hotel. At kickoff its stands were packed out with the usual basking blocks of red and white, the playing surface drenched in a lovely soft evening light.

At which point, in a city that isn’t actually in Russia, England and Belgium played out a World Cup shootout that wasn’t actually a shootout and which was a bit of a muddle in many ways.

In the wake of a 1-0 defeat England will play Colombia at the Spartak Stadium in Moscow. This is an excellent, mouthwatering World Cup tie. It represents unarguable progress after the horror, the stasis, the constipated English style of the past few tournaments. England have every chance of beating Colombia. After which that side of the draw would present some relatively favourable options – as well as Spain, the best team in Russia so far.

Still, though, there were elements of unease. Mainly this was a letdown, a dropping of the throttle that felt out of kilter with the good vibes to date. It was, arguably, a basic misreading of the draw.

In the buildup the idea had taken hold that England would be playing their part in the football equivalent of a slow bicycle race. This was based on the idea finishing first or second in Group G made little difference, with Senegal or Colombia likely opponents.

By kick-off this had changed. Japan were now the first-placed option and Colombia the second. There was a significant difference here. Top the group and play Japan; or come second and play Colombia, followed by A Hypothetically Easier Team in that half of the draw.

England could quite easily still lose to a strong, skilful Japan team. But the fact is Japan are ranked six places below Panama by Fifa and got to this stage only on good behaviour, whereas Colombia are No 16 in the world and reached the quarter-finals four years ago.

In spite of which England still made eight changes – to Belgium’s nine – and in the process sucked the life out of their starting 11. Of England’s outfield 10 only three were regulars in their Premier League teams. No matter how you spin it, this was a scratch team.

It is hardly moralising to suggest so many changes on both sides is also a slight to the robustness of the tournament. No doubt it will also have been a disappointment to some of those who have travelled all this way. When tickets and hotels were booked, the supporters splurging their holiday funds will have imagined they might get to see Harry Kane.

How to explain so many changes? There is the understandable urge to keep all members of the squad happy. On the other hand, this not a jolly, or a game where everyone gets to have a go. It is, just to be clear, the actual World Cup.

Some mention has been made of Southgate’s own unhappy experience of not playing a minute at one tournament. To which the only serious answer is: who cares? This is not a therapy session. But Dr Freud is not present among England’s mob-handed staff. Do it differently. Do it nicer. But personal scars, bruises of the past, have nothing to do with now.

England did have their moments in Kaliningrad. Eric Dier played some nice passes in behind the full-backs from his pivot role. Ruben Loftus-Cheek earned a knee in the thigh from the ever-vigilant Marouane Fellaini, tribute to a decent start. But Belgium’s more fluent second XI deserved their win, earned through Adnan Januzaj’s fine second-half goal.

At the end of which it is a mark of the confusion around this tie that the idea is still out there of an easy side to the draw. The same goes for the need to avoid Brazil in a hypothetical quarter-final. The reality is simpler. Brazil are always a good game for England. Brazil at the World Cup: this is a wonderful occasion, a career high, the reason we play and watch the game.

Plus, of course, those who have seen Brazil at this tournament will know there are some snags in the yellow machine. The Brazil England might have met in their hypothetical quarter-final have some wonderful players but they look far from unbeatable.

For all that, England will travel to Moscow with optimism and with every chance of going further. It is a concern they will face Colombia, who are a better team than Japan, and that they go into a knockout competition on the back of a flaccid, possibly avoidable defeat.

But Southgate deserves all the grace and the luck he gets. Not to mention the chance that rotation in Kaliningrad may yet pay off later. Either way, should England perform as they can on Tuesday those trademark celebratory uppercuts in the Moscow air will probably have a little extra feeling now

1 Rugby players taking the opportunity to focus on the long game
2 World Rugby study advises removal of reset scrums to reduce Covid-19 risk
3 Decision expected next week on staging of College Football game in August
4 Gerry Thornley: Home and away Six Nations could be its ruination
5 Saudi Arabia-funded takeover of Newcastle United in serious doubt
Real news has value SUBSCRIBE
Crossword Get access to over 6,000 interactive crosswords