Japan also go through from Group H, despite Poland defeat, thanks to disciplinary record 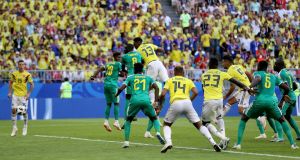 It was the moment that Colombia had prayed for and, when it came, the release of emotion was overwhelming. South America’s second most populous nation needed a win to make sure of their place in the last 16, even though a draw would actually have sufficed in the end because of Poland’s surprise 1-0 win over Japan.

Colombia wanted to make sure themselves and they did so when Yerry Mina rose to meet Juan Quintero’s whipped corner in the 74th minute. When the towering centre half rises in such areas, the alarm bells ring loudly and, just as he had done in Colombia’s restorative 3-0 win over Poland in the previous game, he thumped home his header.

The result, coupled with that in the other tie, meant that Colombia advanced as the Group H winners into a last-16 showdown with England or Belgium. The delight was etched into every pore of José Pekerman’s players, who performed a team dance after the goal. Up in the stands, the great Carlos Valderrama led the celebrations.

Poor Senegal. They had dominated the first half, without managing to extend David Ospina in the Colombia goal, and their performance was marked by sound tactics, organisation and aggressive pressing – together with speed on the counter-attack.

But the roof fell in on them after Mina’s goal and, in the end, they were squeezed into third place and out of the competition on yellow cards accumulated, having finished level with Japan on points, goal difference and goals scored. Two bookings was all the difference. Each of Africa’s five representatives has now exited at the group phase.

The stadium was swathed in bright yellow – it really was a Colombian takeover – and the noise was deafening from the first whistle until a sudden gasp and silence on 17 minutes. Senegal thought they had a penalty and it would have been just reward for a pacy and positive opening.

The referee, Milorad Mazic, pointed to the spot, after Davinson Sánchez had jumped into a challenge on Sadio Mané, even if the decision looked harsh in real time. Enter VAR and it quickly became apparent that, although the Tottenham Hotspur defender might have brushed Mané’s shin first, he clearly took the ball. To immense Colombian relief, Mazic reversed the decision.

Mané had found the space off the shoulder of Sánchez to glide on to the through-ball and it had to be said it is not always a good look for a central defender to have to dive back into a last-ditch slide tackle.

Aliou Cissé had started with Mané up front alongside the powerful and direct M’baye Niang in a 4-4-2 formation and the movement of both strikers caused problems. Mané looked to have the beating of every Colombia defender and it was an uncomfortable first half for Colombia, as Senegal imposed themselves.

In the previous round of matches, Poland had sat off Colombia and allowed them to play. Pekerman’s team duly did and the victory was transformative. Previously, the mood in Colombia had been heavy on negativity – and that went back to before the opening group tie against Japan.

Senegal were not going to make the same mistake. Mané was electric when he had the ball and it was an exhilarating sight for the small knots of Senegal fans, one group of which stepped a couple of paces to one side and then back to the other in perfect harmony, when he tore into dangerous areas. He looked as though he would make something happen. On the other hand, there was disappointment for Senegal at half-time in the failure to create any clear-cut opportunities.

Colombia could point to a 12th minute free-kick from Juan Quintero that bounced awkwardly in front of Khadim N’Diaye, forcing the goalkeeper to push it round for a corner, but they were disjointed and strangely passive before the interval.

A hammer blow for them had come on 31 minutes when James Rodríguez was forced off. The attacking midfielder – the pin-up boy from their bolt to the quarter-finals of the last World Cup – had carried a calf injury into the tournament and he did not look fit. He touched the ball only 15 times and, when he slumped to the turf, it was in obvious frustration. He walked straight off down the tunnel.

Colombia would have known at half-time that Japan were level at 0-0 against Poland. They surely needed something; the onus was on them in the second half and their fans knew it. The draw was still good for Senegal.

Poland have been one of the major disappointments of this World Cup and yet there was a crescendo of noise from the Colombia support around the hour mark when the news of their goal against Japan filtered through. Suddenly, Colombia were in a position to qualify, although to rely on Poland was not a sound idea.

Colombia were more assertive after the break; they began to gain a foothold higher up the pitch. Rodríguez’s replacement, Luis Muriel, saw a shot blocked by Kalidou Koulibaly and he was beaten to a through-ball by the advancing N’Diaye before Mina ran off Cheikhou Kouyaté to strike with his header.

Senegal stared at disaster and they rallied. It was breathless stuff and the noise was a relentless din. Niang rolled Mina and shot only for Ospina to show strong hands and save – it was a big moment – while the goalkeeper also got down to stop a corner that deflected goalwards off Mina. Ismaila Sarr fluffed a volley when well-placed and the pain would belong to Senegal. – Guardian service