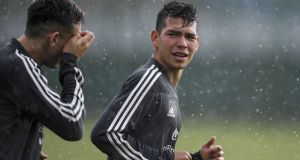 Mexico’s Hirving Lozano came into this tournament ready to make an impact and he did so in the very first game by scoring the winner against Germany and picking up the man of the match award. The 23-year-old has been linked the Everton recently after a stunning first season with PSV Eindhoven where he scored 17 times in just 29 games. His price tag has certainly gone up already and could go up further if he continues his good form as Mexico look ready to reach the last-16 at least.

Known by his nickname of Chucky, Lozano generally plays on one of the wings, cutting inside and finding the net with some powerful shots.

On Saturday Mexico will rely on him to run the South Korean defence ragged and provide for Javier Hernandez as the 15th ranked team in the world look to book their place in the last 16 ahead of Germany.

Leon Goretzka is a 23-year-old who has just completed a summer move from Schalke to Bayern Munich, disappointing a number of Premier League suitors in the process. The tall defensive midfielder has already scored six times in just 14 games for Germany and his move to Bayern confirms that he is thought to be in the very highest bracket as the Bundesliga giants only sign the best when it comes to young German talent. He didn’t get off the bench against Mexico but may well feature when Germany take on Sweden on Saturday night with the pressure mounting on Joachim Loew’s men.

There is a pet puma named after Lionel Messi in the Russian city of Penza. Barely 20 months ago a Russian couple were oblivious of the basic rules of soccer. Now they are ardent fans and the transformation can only be attributed to Messi – not Argentina’s World Cup captain but their pet puma.

Messi, a two-year-eight-month-old cougar, lives with Maria and Aleksandr Dmitriev in a one-bedroom apartment in Penza, not in a very different environment from any other pet cat or a dog in the country.

Maria, 28, and the 38-year-old Aleksandr are both psychologists by education and fell in love at first sight of Messi at the Penza zoo when he was a sickly eight-month old cub. He was one of three Puma cubs born at Saransk zoo who were named after famous international players -- Suarez and Neymar were the others -- to celebrate the Russian city hosting four matches in the group stages of the World Cup.

Messi was sold to the Penza zoo when he was three months old.