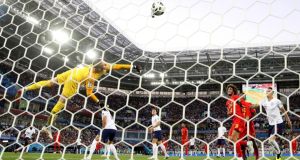 Gareth Southgate is a tower of sense but there was a sense here in Kaliningrad that he got drawn into playing Russian roulette with England’s chances. A vanilla game of football featuring the reserves of both sides has handed England their first defeat of the tournament and means they will face Colombia in the last 16.

Belgium’s prize for winning a game that neither side seemed certain they wanted is a meeting with Japan and then, possibly, Brazil. It was hard not to feel that Belgium came away with the best of this strange gentleman’s agreement in Kaliningrad.

The feelgood sense of a team on a roll: Harry’s Golden Boot chase; the continuity: all was halted here. It means that England’s first team will go into a knockout game after nine days without a game. For the first time here in Russia, Southgate sounded slightly defensive in tone as he forecast the potential fallout of this night.

“Whatever happens next week, that is the right decision as far as I am concerned. Which half of the draw: who knows what is right or wrong? Our key is a knockout game that we are hugely looking forward to.”

The reason for playing these group games simultaneously goes back to the notorious collusion between West Germany and Austria in 1982, when both teams, aware that a 1-0 victory for the Germans would give them safe passage while eliminating Algeria.

After 10 full-octane minutes, Germany’s Horst Hrubesch scored and then both teams passed the ball around for the next 80 minutes without the pretence of an attack. The game became known as the Disgrace of Gijon but the Germans had a more diplomatic terms: the Nichtangriffspakt of Gijon: the non-aggression pact. For long periods of the first half, this was like the inverse of that dark episode: the Nichtangriffspakt of Kaliningrad, with neither team trying to do anything much, but absolutely nothing riding on it.

The radical selection overhaul by both managers betrayed a kind of indifference to the outcome and helped to contribute to the complete lack of tension in the stadium. It wasn’t the fans’ fault: the weird thing was that the occasion seemed to mean more to the thousands who had made the trip here than it did to the players on the field.

They sang their respective anthems, saluted the departed world champions with a jubilant chorus of auf wiedersehen and were willing to give this game every chance. But it was difficult and the low booing that rang around in the first half reflected the feeling that this game was a sham.

“Of course we have a responsibility to the fans,” said Southagte. “And the support in the stadium was brilliant. But when you are a leader and a manager you have to make decisions that are right for your group. And sometimes those decisions will be criticised and I understand that. We have 20 outfield players now that have played in the World Cup. That is hugely important for the feeling in our camp over the next few weeks.”

By the 40th minute, England had still to create a shot on goal, with a clean look for Ruben Loftus-Cheek off Trent Alexander-Arnold’s inswinging right-side corner the closest they came to keeping their Russian goal streak going.

Southgate made an appearance on the touchline every now and then, just to reassure everyone he was still there and then retreated into the dugout, possibly to catch up on email correspondence. Roberto Martinez stood in his customary spot, surveying the non-event. Both managers were so blatantly unconcerned by the result that they might well have come out parading a banner: It’s not the winning that matters. It’s the taking part.

Belgium’s contribution to the first half was limited to a stabbed shot by Marouane Fellaini in the 27th minute and two suspiciously awkward tackles by Youri Tielemans and Leander Dendoncker, both on Danny Rose, to leave them 5-2 ahead in the yellow card count and therefore destined for second place in the group.

The unexpected goal by Adnan Januzaj changed all that. It was a gorgeous strike, taking Tielemans’s rolled pass, losing Rose with a drag-back and curling his left-footed shot perfectly beyond the reach of Jordan Pickford.

It saved the match from complete uselessness even if the immediate aftermath, in which Michy Batshuyai followed-up with a celebratory thump at the ball only to almost knock himself unconscious when it ricocheted off the post, will probably be in digital circulation years after the goal has been forgotten. It was that kind of night: monumental inconsequence.

Or at least one in which the consequences will only become clear later.

If England were in a muddle over what they wanted from this match, the goal decided matters for them. There was a faint ominousness about the closing minutes, when Belgium seemed to hit a higher gear and exposed England with two sweeping attacks which Fellaini couldn’t finish. Maybe then it began to occur to Southgate that resting a platoon of first-choice stars was a luxury that Belgium could afford and that England could not.

Martinez was able to use the final minutes to give Vincent Kompany some playing time while Kane spent a long time lacing his boots without ever looking likely to leave his seat. Southgate sent Danny Welbeck onto the breach: nothing much changed. England lost the game: it remains to be seen if the magic left too. One late question caused the temperature to dip in the room. “Will you be practicing penalties?” Southgate was asked.