Shamrock Rovers facing a torrid test in the Cypriot heat 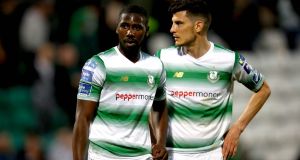 Dan Carr and Graham Cummins: Carr is hoping to get on the scoresheet again for Shamrock Rovers but Cummins misses out on the game in Cyprus due to concussion. Photograph: Ryan Byrne/Inpho

Apollon Limassol’s Argentinian midfielder Esteban Sachetti was sent off for a nasty challenge on Hoops’ talisman Jack Byrne as Rovers stunned the fancied Cypriots to come from behind to win last week’s first leg 2-1 at Tallaght Stadium.

And the expected mid-20 degrees dead heat at the 8pm local kick-off time in the GSP Stadium will be just another factor for Rovers to deal with against a wounded Apollon who went into the tie as warm favourites.

Stephen Bradley’s side showed admirable discipline last week as a frustrated Apollon left their foot in during the second half. Aaron McEneff also suffered a head cut from Sachetti’s errant elbow.

“We remained professional. We didn’t lose our heads,” said Carr of that self control which may be needed again tonight. “We were quite pleased with the way we handled it.”

Carr insists that Rovers must also play without fear tonight.

“If you play with fear then you are never going to succeed the way you should,” said Carr who insists he got the final touch to last week’s equaliser.

“Nothing changes tonight. We go out with no fear and what will be will be.”

Londoner Carr scored away to AIK Stockholm last summer. Another goal tonight, to also add to the one he’s claiming last week, wouldn’t go amiss either.

“One hundred per cent it’s mine,” said Carr of Rovers’ first leg equaliser which had been credited to defender Lee Grace whose header hit a post.

“It hadn’t crossed the line. If I don’t tap it in the defender clears it away. I’ll be on to Uefa!”

Bradley is without striker Graham Cummins who suffered concussion in Cork on Sunday while winger Neil Farrugia is not yet fit following a hamstring injury.

Graham Burke, who re-signed on loan from Preston North End yesterday, is ineligible.

The Rovers manager is prepared for a big reaction from Apollon who’ve qualified for the groups stages of this competition four times in the previous six seasons.

“They are obviously going to try to improve on what they showed last week. But I’m sure we can as well,” said Bradley. “Tonight is about getting our game plan right and make sure we impose ourselves on them when we have spells in the game.

“We’re not coming here to sit back and hope to get a result. If you do that you are asking to get beat. We’ll go to try to win the game from the first minute.”