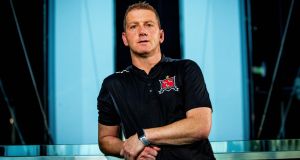 Dundalk head coach Vinny Perth believes all the pressure is on Qarabag ahead of their Champions League second qualifying round second leg tie in Azerbaijan tonight.

The tie is evenly poised after last week’s 1-1 draw in the first leg at Oriel Park.

Gurban Gurbanov’s side are the hot favourites to advance having reached the group stages of the Europa League in four of the last five seasons and the Champions League group stages in the other in 2017/18.

However, Perth is confident that if his side can stay in the tie early on at the Dalga Arena tonight then pressure could get to the Azeris.

“I’d imagine there is massive pressure on them, more so than us.

“We have internal pressure. We don’t have players on 500k, 600k, 700k a year. There is huge pressure on Qarabag to get through this tie as group stages of Champions League football will be their number one goal.

“One goal for us would put them under massive pressure. That’s why staying in the tie, into the second half, is important for us and would allow us exert some of that pressure.”

Perth said that despite the underdog tag, Dundalk had genuine hopes of advancing to a third qualifying round tie against either APOEL of Cyprus or FK Sutjeska of Montenegro.

“I put myself under pressure because I want to achieve something in Europe.

Dundalk will be without midfielder Robbie Benson for the game, which kicks off at 6pm Irish time, after he failed to recover from a rib injury sustained in last week’s first leg.

Meanwhile, full-back Sean Gannon narrowly avoided being banged up abroad when local police stopped him and Jamie McGrath as they were doing a photoshoot on the promenade in front of their hotel yesterday.

“I nearly had to get bailed out,” he laughed.

“We were on the promenade there and these guys came along. I was actually with RTÉ at the time and I looked around and there was this little miniature police car flying down the promenade that went straight up to Jamie. Jamie is a quiet enough lad as it is but I don’t think his Azerbaijani is any good. We were nearly getting put in a cell by the looks of it. They just said we had no permit and within five minutes there was literally eight or nine police around us.”

Thankfully the issue was resolved with Gannon outlining his desire to win the game. “The tie is level at the moment and we have to score but sometimes that kind of suits us better when we know we have to score because we have great players on the counter-attack and great players that can score at any time. We know what we have to do and if we were to beat them it would be a huge achievement,” said the 28-year-old.