Mauricio Pochettino being made to feel more coach than manager 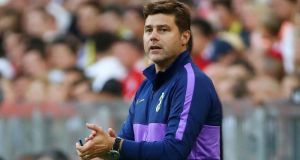 Mauricio Pochettino said Tottenham should change his job title to coach because he has no influence over transfers after Harry Kane’s winner gave his side a 1-0 Audi Cup win over Real Madrid.

Spurs broke their transfer record to sign Tanguy Ndombele from Lyon for an initial £55m earlier this month, but Pochettino said he is in the dark about any more signings. The manager, who swerved questions regarding the future of Danny Rose, said: “I am not in charge and I know nothing about the situation of my players. I am only coaching them and trying to get the best from them. Sell, buy players, sign contract, not sign contract – I think it is not in my hands, it’s in the club’s hands and [CHAIRMAN]Daniel Levy. The club need to change my title and description. Of course I am the boss deciding the strategic play, but in another area I don’t know. Today, I feel like I am the coach.”

Pochettino, who has previously intimated frustration with his club’s transfer policy, watched as Harry Kane’s first-half strike proved enough to see them past Zinedine Zidane’s side. Kane intercepted a wayward back-pass by Marcelo after 22 minutes and slotted what turned out to be the winner past Keylor Navas. Real’s 19-year-old striker Rodrygo had a goal disallowed for offside before fellow teenager Troy Parrott (from Dublin) almost grabbed Tottenham’s second in the dying moments but saw his low shot strike the post.

Rose and Christian Eriksen both started for Spurs despite recent transfer speculation, while Gareth Bale missed the game with Zinedine Zidane insisting he was ill. “Why did not Bale travel? Because he did not feel well and after talking with the doctors it was better to stay in Madrid,” said Real’s manager. “He stayed training there. It’s a joint decision, made by the doctors and me, and I spoke with him, that’s all.”