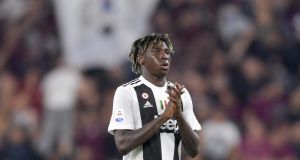 Everton have a concluded a deal with Juventus to sign Moise Kean for an initial €32m and the foward is due to fly to England on Wednesday to finalise the move.

The signing of the 19-year-old Italy international would be a significant coup for Everton, who on Monday sold Idrissa Gueye to Paris Saint-Germain for a fee understood to be €32m.

Everton could end up paying €40m for Kean with add-ons and have agreed to pay him £2.75m (€3m) a year. The player, who had one year remaining on his contract, scored six Serie A goals in 13 appearances last season and has played three times for Italy.

Gueye has sealed his transfer on a contract to 2023 after Everton rejected a £21.5m (€23.4m) offer from PSG in January. Marco Silva had hoped to keep Gueye at Goodison Park this season but the player was determined to join the French champions.

“I wanted to give a new boost to my club career by joining Paris St-Germain, one of the most structured and ambitious sports projects in Europe,” Gueye told his new club’s website.

Everton have made a substantial profit on the 29-year-old Gueye, who signed from Aston Villa for £8m (€8.7) in 2016. The Senegal international has previously played in France for Lille from 2008-15.

Everton have signed Fabian Delph and Jonas Lössl this summer and turned André Gomes’s loan from Barcelona into a permanent transfer. – Guardian