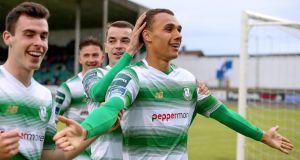 Shamrock Rovers have brought Graham Burke back to the club. Photograph: Tommy Dickson/Inpho

Shamrock Rovers have completed the re-signing of Preston North End of striker Graham Burke on loan. The deal is until July next year.

The 25-year-old Republic of Ireland international moved from Rovers to Deepdale in a three-year deal in June 2018 for a fee believed to be €300,000.

Having joined Aston Villa in 2011, Burke returned home to sign for Rovers in February 2017 after loan spells with Shrewsbury Town and Notts County, re-igniting his career in a Hoops shirt with some spectacular goals.

During that time he was capped twice against France and the USA. In the latter game at the Aviva Stadium, a 2-1 win, he became the first League of Ireland player to score in a senior international for Ireland in 40 years.

Though in Nicosia with his Rovers team-mates, Burke was ineligible to play against Apollon Limassol in their Europa League second qualifying round second leg match.

“I’m delighted to get him in,” said Rovers’ manager Stephen Bradley. “It’s been ongoing for a while.

“I always spoke to him since he left. When the opportunity of his availability came up, I mentioned it to him and he was delighted.

Bradley said he was surprised Burke didn’t make a bigger impact at Preston who had loaned him out to Gillingham in the second half of last season.

“Of course,” said Bradley. “Someone of Graham’s ability and talent. He’s a top player and I think everyone has seen that throughout his career.

“I think when you go England you need a lot of things to fall into place. There are so many things that need to happen for a player to show their ability. That just was’t the case for Graham.”

Seen as an attacking midfielder, Burke just adds to Rovers’ options in that area, but is likely to be used as a striker.

“Graham can play both. During his career, he’s played up front and he’s played in midfield on the left and the right. He can play anywhere in the attacking part of the pitch.”