Scottish Premiership round-up: Celtic cruise back to the top 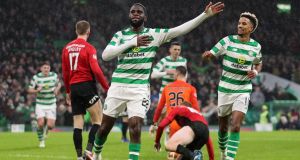 Celtic stormed back to the top of the Scottish Premiership with a crushing 5-1 win over Kilmarnock, who had started the day at the summit.

That became two in the 25th minute when Tom Rogic played the ball through to Odsonne Edouard and he fired into the roof of the net.

Celtic were rampant and Mikael Lustig stabbed in a third from Callum McGregor’s free-kick 10 minutes later.

In-form forward Ryan Christie curled a free-kick past goalkeeper Dan Bachmann to make it 4-0 at the break but Kilmarnock were on the scoresheet through Eamonn Brophy’s penalty early in the second half.

Forrest scored his second goal of the game in the 67th minute, pouncing on the loose ball after Christie had been brought down.

Hearts moved level on points with third-placed Rangers as Peter Haring’s 14th-minute header from Ollie Bozanic’s cross was enough to secure a 1-0 win against Motherwell.

The Dons, who were 1-0 winners at Rangers in midweek, fell behind in the 71st minute when Joe Shaughnessy headed in a David Wotherspoon corner and Blair Alston added a quickfire second with a stunning curling strike.

Livingston came from a goal down to ease to a 3-1 victory over St Mirren.

Alfie Jones’ first goal for the Saints put them in front in the 36th minute, with the on-loan Southampton defender nodding in an Adam Hammill free-kick.

It was 1-1 early in the second half when Scott Pittman’s low drive beat goalkeeper Danny Rogers and the home side went ahead after 64 minutes when Ryan Hardie slammed in the loose ball after Pittman’s shot had been saved.

Livi substitute Jack McMillan looped a header against the crossbar but Craig Sibbald did add a third with two minutes remaining, turning the ball home after Rogers had spilled a Pittman effort.

Oli Shaw scored the only goal of the game as Hibernian claimed a 1-0 win at Hamilton.

Hibs lost Martin Boyle to injury on the stroke of half-time after he collided with Gary Woods and left the field on a stretcher.

Shaw broke the deadlock for Hibs in the 65th minute, neatly hooking a cross from Daryl Horgan past the goalkeeper.

1 It’s shocking how men have driven women away from exercising in public
2 Ken Early: Maradona’s wonder goal a monument to lost freedom
3 The Offload: Shane Horgan pulls no punches as the podcast wars rage on
4 Ireland 23 Georgia 10: How the Irish players rated
5 Nicky English: No surprise that Limerick and Waterford in final
Real news has value SUBSCRIBE
Crossword Get access to over 6,000 interactive crosswords