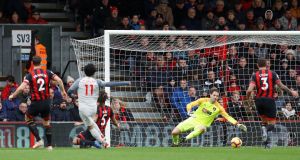 Liverpool’s supporters hailed their “Egyptian king” for taking his personal tally to 10 league goals as Jurgen Klopp’s men matched that record run of the class of 2008.

Salah’s second goal proved a study in perseverance over play-acting, the 26-year-old refusing to go down under a naughty challenge from Steve Cook — before drilling home in style.

The beaten Cook stepped his studs on Salah’s Achilles in a clear act of desperation, but not even that foul could deny the Liverpool hitman.

Cook’s day turned from bad to worse when he turned Andrew Robertson’s low cross into his own net, before being bamboozled by Salah as the rampant forward completed his treble.

James Milner toasted his 500th Premier League appearance in helping Liverpool secure their seventh away win of the campaign.

The Anfield men tiptoed back to the top of the table, temporarily at least, with Manchester City facing Chelsea at Stamford Bridge in Saturday’s evening kick-off.

The goal stood, much to Bournemouth’s chagrin, and some of that ire perhaps accounted for the home side’s upswing in composure and performance up until the break.

A startled Nathan Ake should have buried a fine chance when a looping corner dropped to him at point-blank range at the far post.

Instead the Dutch defender connected only with fresh air, and the ball bobbled to safety.

Junior Stanislas’ hands raced immediately to his head when he overhit a return pass that should have set Joshua King clear, but instead rolled harmlessly out wide.

Alisson Becker then escaped without punishment for upending King in the area when climbing high but failing to reach a hoisted ball into his box.

King stayed down under the heavy clattering, leaving referee Roger East to halt play so the Norway striker could receive treatment.

Bournemouth could be forgiven for feeling aggrieved at not being allowed a pot-shot at Alisson’s unguarded net. Instead play restarted with Robertson booting a drop-ball all the way back to Asmir Begovic.

Liverpool killed any hope of a home recovery straight after the break though, the ruthless Salah shaking off that crude challenge from Cook before angling home in style.

Bournemouth’s hefty loss deepened when Cook lost his bearings and unwittingly flicked into his own net on the turn. Such a finish would have been toasted at the other end; instead it merely encapsulated a tough afternoon for both defender and hosts.

Salah then sealed his fine hat-trick, Cook slipping in confusion with the Egypt striker turning Begovic inside and out before tapping home.

1 Gordon D’Arcy: There’s more to Saracens’ success than money
2 Seán Moran: Total disregard for schools as GAA votes one way and acts in another
3 Leona Maguire and Stephanie Meadow embark upon historic 2020 season
4 10-man Arsenal show their heart to rescue a point at Chelsea
5 As the UK tightens gambling laws Ireland still lags way behind
Real news has value SUBSCRIBE