Meanwhile, West Ham came from behind to beat Palace while there was no new manager bounce for Southampton 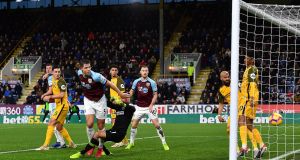 James Tarkowski’s first-half goal secured Burnley their first win in nine Premier League games as they won 1-0 at home to Brighton to move out of the relegation zone.

The Clarets, who had picked up just two points from their previous eight matches, scored in the 40th minute when Jack Cork hit a shot and the ball went in off Tarkowski.

The defender almost added a second with a 62nd-minute header before Brighton substitute Jurgen Locadia nodded over from a great position and Solly March struck narrowly wide.

On the back of their first victory since September, and only their third in the league this season, Burnley moved up from second bottom to 17th place. Brighton dropped a place to 11th.

West Ham soared into the top half after goals from Robert Snodgrass, Javier Hernandez and a Felipe Anderson beauty sank Crystal Palace 3-2.

The Hammers, rock-bottom after losing their first four matches of the season, have now won three on the spin, scoring three goals in each.

Frank Lampard was in the West Ham side the last time they managed that feat. Frank Lampard senior, that is, in 1982.

They had to come from behind, though, after James McArthur put struggling Palace into a surprise sixth-minute lead.

Ralph Hasenhuttl began his reign as Southampton manager with a 1-0 defeat at Cardiff as makeshift striker Callum Paterson delivered again.

Hasenhuttl was brought in after Mark Hughes was sacked on Monday and, mindful that the Titanic had sailed from Southampton, spoke of not “hitting any icebergs” at his first press conference.

But Southampton were sunk by the sort of mistake which has left them in the choppy waters of the relegation zone and cost Hughes his job.

There seemed no danger in the 74th minute when Jannik Vestergaard was in control and seemingly shepherding the ball back to his goalkeeper Alex McCarthy.

Referee Jon Moss was considering bringing the play back for a foul on Cardiff’s Victor Camarasa, but the big Danish centre-back made a hash of his possession.

The split-second was all that Paterson needed and the striker, who was signed as a right-back and who still fills that position for Scotland, nipped in to beat McCarthy for his fourth goal of the season.

So it was the same old story for a Southampton side who have won only once in the Premier League this season and drop to 19th place, five points adrift of upwardly mobile Cardiff.

1 Seán O’Brien: Anger over my parents’ break-up never left me
2 Madness or defiance? The GAA is taking a huge gamble in staging Championships
3 Sportsman to statesman, Marcus Rashford is a ray of light in the darkness
4 All in the Game: Klopp’s Amsterdam subs don’t go down well
5 Plenty of positives for Farrell as Ireland hit the ground running
Real news has value SUBSCRIBE