Scottish FA given permission to open talks with Michael O’Neill 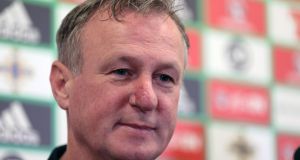 The Scottish FA will open talks with its prime managerial target Michael O’Neill after being granted permission by the Irish Football Association on Friday.

The SFA has refused to comment on the situation and still regards the hiring of O’Neill as far from a fait accompli but this development will be seen as significant after weeks of apparent deadlock.

Scotland are expected to make O’Neill an offer to become the highest paid manager in their international history, with a four-year contract likely to be on the table. This would include a lucrative bonus for ending a major finals wait which stretches back to 1998.

O’Neill has been the SFA’s first choice to succeed Gordon Strachan since October, when it was confirmed back-to-back failed qualification campaigns would trigger dugout change.

O’Neill’s current employers insisted the Scots meet certain terms – relating crucially and financially to the notice period within his contract – before they could speak to the 48-year-old. After a lengthy period of legal checks and further due diligence by the SFA, agreement has been reached between the associations.

Any deal to O’Neill himself will show a significant boost to the £500,000 (€562,500) per year terms as given to Strachan but a long way short of the £1 million (€1.125 million) a year salary as speculated from Northern Ireland when Switzerland emerged victorious from a World Cup playoff between the pair. Sunderland duly failed with overtures towards O’Neill before the hiring of Chris Coleman.

It is far from certain O’Neill – who lives in Edinburgh – will be coaxed by this alternative international role, meaning the SFA is right to remain cautious. The Irish FA is to offer him a contract running until 2024 with a substantial increase on his current salary.

The former Shamrock Rovers manager will need to be convinced by the SFA of the switch being beneficial to his career. There is, however, a lingering sense that O’Neill may have taken Northern Ireland as far as he can; with the possibility of leading different, low-ranked nations to major tournaments inevitably a consideration in terms of reputation. – Guardian service