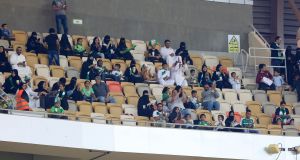 Women pictured in the crowd at the King Abdullah Sports City stadium in Jeddah for the Saudi Pro League match between Al-Ahli and Al-Batin. Photograph: AFP

Saudi women have attended a football match in Saudi Arabia for the first time, as part of reforms spearheaded by the kingdom’s crown prince.

Female football fans wearing scarves and waving flags took their seats at the King Abdullah Sports City stadium in Jeddah for Al-Ahli’s match against Al-Batin in the Saudi Pro League. The women, however, had to enter through designated turnstiles for women and families.

Lamya Khaled Nasser, a 32-year-old from Jeddah, told Agence France-Press she was proud and looking forward to the match. “This event proves that we are heading for a prosperous future. I am very proud to be a witness of this massive change,” she said.

Ruwayda Ali Qassem, another Jeddah resident, said Friday was a “historic day in the kingdom which culminates [in] ongoing fundamental changes”.

“I am proud and extremely happy for this development and for the kingdom’s moves to catch up with civilised measures adopted by many countries,” she said before kick-off.

The Saudi government said last week women would be allowed to attend a second match on Saturday and a third next Thursday. The rest of the country’s football grounds will be ready for female fans by the beginning of the next sporting season. Stadiums will also have separate cafes and prayer rooms for women.

Al-Ittihad, one of the country’s top football clubs, is scheduled to play in a derby game in front of mixed spectators on Saturday. It prepared for the historic match by tweeting an image featuring a woman’s face painted in gold, the club’s colour.

The move to open up stadiums to women for the first time was announced last October.

“The general sports authority has provided everything that would create an attractive sports environment for families and provide everything needed to ensure their privacy,” the country’s sports governing body said in a statement.

On Thursday women flocked to Le Mall in Jeddah to view the kingdom’s first car exhibition aimed at them, a few months after King Salman issued a decree granting them the right to drive from June 2018 – a move opposed by hardline clerics.

The exhibition focused on fuel-efficient cars and provided a team of saleswomen to help their new customer base. The showroom carried signs emblazoned with the slogan “Drive and Shop”, a play on words in Arabic, using the female form of the verbs.

“Ittihad fans, male and female, are the support of this club, and success is not complete without them coming together to serve this historic entity,” the club tweeted. “With you, the scene is complete.”

The driving and football developments are the latest in a series of social reforms ordered by the crown prince, Mohammed bin Salman, who wields extraordinary power. Last year he pledged to modernise the kingdom and to scale back the power of its ultraconservative clerics, returning Saudi Arabia to what he described as “moderate Islam”.

Saudi women still require a legal guardian for many matters, and years of oppression and appeasement of the top clerics have widened the gender gap and held women back from participating in the workforce and public life. – Guardian service

1 David Clifford sends everyone back to their corners unbeaten
2 Six Nations: A 21st-century tournament that saw Irish rugby come of age
3 Six Nations: Ireland are contenders but England still the team to beat
4 Sublime 67 leaves Rory McIlroy right in the mix at Torrey Pines
5 Mike Catt hopes to have Irish backs purring in Six Nations
Real news has value SUBSCRIBE
Crossword Get access to over 6,000 interactive crosswords