‘I had my suspicions about their winning goal, fuelled by the reaction of my keeper’ 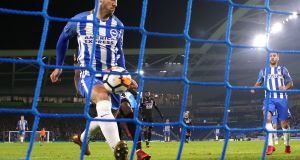 Roy Hodgson admitted he had directed “spiteful” words at the referee, Andre Marriner, after watching the Brighton striker Glenn Murray put his Crystal Palace team out of the FA Cup with a potentially controversial late winner for 2-1.

But Hodgson changed his tune entirely after being assured that Murray had not used his hand to ease the ball over the line. The assurances came via the Video Assistant Referee, which had been used for the first time in an English club match.

Hodgson was led to believe that the video assistant, Neil Swarbrick, who watched the game from a west London studio, had radioed through to Marriner, the on-field referee, to tell him that the goal should stand – or, at least, that there were no angles to prove that it ought to be disallowed.

Hodgson said: “Without a doubt I had my suspicions about their winning goal, fuelled by the reaction of my keeper and the players who were close to the incident. They looked incensed. I made a few spiteful comments to the ref at the final whistle but that’s just my nature and I regret them now.

“There is still a slight suspicion that the ball might have brushed Murray’s arm but I think it was a genuine goal and, if my player had scored like that I would be very upset if it was disallowed.

“There was a brief pause after the goal and I was under the impression that Marriner was talking to Neil Swarbrick in the VAR studio. Swarbrick has seen it from a better angle and it’s not a handball. So I have to congratulate the system and I have no complaints at all.”

Chris Hughton, the Brighton manager, said: “I am under the impression that VAR was used on the goal and they didn’t see an infringement. Having seen it again, it’s reasonably clear it didn’t hit his hand and there was no decision to be made.”