‘I touched the point where he really feels hurt,’ says Manchester United boss 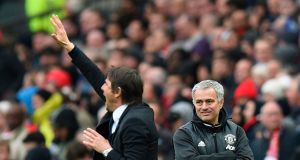 José Mourinho has claimed he now feels “contempt” for Antonio Conte, with Manchester United’s manager intent on finally drawing a line under the insults he and his Chelsea counterpart have been trading.

Last week Conte accused the Portuguese of having “demenza senile” after believing Mourinho had referenced him when discussing a “clown on the touchline”.

While Mourinho denied he meant Conte, the 54-year-old then spoke of the Italian’s four-month ban for failing to report alleged match-fixing, which prompted the Italian to brand Mourinho a “little man”.

Asked about all of this, United’s manager said: “I think when a person insults another, you can expect a response. Or you can expect contempt, silence. The first time he insulted me I had a response, a response that I know that touched the point where he really feels hurt. Then he insulted me for a second time, but now I change and now [I feel] contempt, and for me, contempt means: end of the story.”

Meanwhile, Jürgen Klopp has said Liverpool had to sell Philippe Coutinho this month because he could not be sure of the Brazilian’s commitment for the remainder of the season.

Liverpool sanctioned Coutinho’s dream move to Barcelona on Saturday for £142 million, the second biggest transfer fee in history until Kylian Mbappé makes his £160 million switch to Paris Saint-Germain permanent. The Anfield club resisted three previous offers for the 25-year-old last summer and had wanted to keep their influential playmaker until the end of the season.

But, despite having the player under contract until 2022, Klopp insists Liverpool had no alternative but to sell as Coutinho was set on Barcelona and his continued commitment to the team could not be guaranteed.

When asked why Coutinho was sold in this window, the Liverpool manager replied “because there was no other option”.

“If there is somebody who should be angry or disappointed it could be the manager of the club but I’m not because I know the club tried absolutely everything to convince Phil to stay and carry on together. It was his dream. It’s the truth when he said he left Liverpool only for one club, Barcelona, and there was a moment when we had to accept that. The club was fighting until the last second to keep him. – Guardian