Reporters starved of answers as Martin O’Neill dines in peace 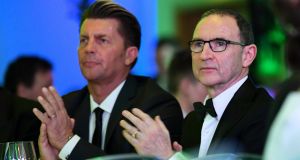 Towards the end of Shakespeare’s Titus Andronicus, the Roman general of the title tells Goth queen Tamora that the pie she had just eaten contained the remains of her kids, and several of the leading characters then proceed to kill each other.

Okay, Martin O’Neill’s attendance at the annual Soccer Writers’ Association of Ireland banquet was never going to produce quite so many actual casualties but to judge by the Republic of Ireland manager’s arrival at the event, the atmosphere had the potential to be just as grim by the end of the evening.

The manager only attended after an apparent change of plans but the FAI said in advance that he would just be eating, not talking. The nature of the organisers’ line of work meant that it was never going to be left quite as easily as that, but as he arrived O’Neill left little room for doubt regarding his determination not to engage with his hosts. The 65-year-old did not break stride or acknowledge in any way requests that he stop and answer a question or two about the week that’s been in it.

O’Neill was joined on the night by Roy Keane and the rest of his backroom staff, and rather than sit at the top table, as had been the norm when they attended in recent years, the group was accommodated at one hastily arranged for the FAI.

That just might have been to spare everyone the awkwardness of the Derry man and a Soccer Writers’ Association of Ireland committee member, who had written in one of yesterday’s papers that he should not let the door clatter him on the way out, having to sit through a four-course dinner together, as would have been the case had the original seating plans been adhered to. It might have been, but we may never know.

That may not be the only grievance the manager is nursing after the coverage of this week’s attempt by Stoke City to appoint a successor to Mark Hughes, but then few of the soccer reporters in the room were all that impressed either with the lack of a statement from either O’Neill or his apparently helpless employers over the previous five days, never mind his refusal to address the issues that have arisen this week in even the briefest of exchange as he arrived at the Conrad Hotel.

There had been some idle speculation as the reporters waited for him to arrive that the FAI would suddenly spring a press release revealing that he had finally signed the contract he himself revealed had been agreed way back in October. That didn’t happen, though.

What does seem pretty clear at this stage is that O’Neill will not be Stoke City’s next manager. Club officials were reported to be in Spain on Friday nailing down the details of their agreement with former Watford boss Quique Sánchez Flores, although reports in the club’s local paper, the Sentinel, had suggested early on Friday that it would be the weekend before an announcement would be made. Some in Spain raised the possibility that the 52-year-old might yet take charge of Espanyol’s league game against Athletico Bilbao on Sunday.

It seems increasingly unlikely, but if that deal somehow falls apart then O’Neill is still ostensibly the club’s second choice, and perhaps we will get to relive last week’s shambles over the course of the one to come. For now, though, the FAI suggests that it is business as usual.

Yeah, it sort of feels that way all right.

1 Sordid murder of hurling brothers still resonates in south Galway
2 Ireland 23 Georgia 10: How the Irish players rated
3 Ireland’s autumn of discontent continues with abysmal Georgia showing
4 Fans put Lennon under pressure as Celtic knocked out of league
5 Nicky English: No surprise that Limerick and Waterford in final
Real news has value SUBSCRIBE
Crossword Get access to over 6,000 interactive crosswords