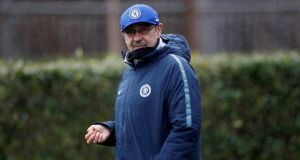 Maurizio Sarri believes his tenure at Chelsea will extend beyond the end of the season, regardless of securing qualification for the Champions League, and has held talks with the club’s hierarchy to plan the team’s preseason activities.

Sarri will oversee the first leg of the Europa League last-16 tie against Dynamo Kiev on Thursday night, with Chelsea having responded well to a run of five defeats in 10 domestic games.

The team performed spiritedly in the League Cup final, which was lost on penalties to Manchester City, while successive Premier League victories in the days since have left them only five points behind third-placed Tottenham, with a game in hand over all the clubs above them.

There remains the possibility of securing a return to Europe’s elite club competition by winning the Europa League, while the upturn has served to alleviate some of the immediate pressure on Sarri.

His position had come under considerable scrutiny over the last few months but he has spoken with the director, Marina Granovskaia, about the club’s summer and believes that willingness to plan for next term is an indication he will remain in charge.

Sarri had been critical of the preseason schedule he inherited last year, which involved friendlies in Australia, Ireland and France, an itinerary he had tactfully described as “unusual”.

“But we were talking about the problem of the next preseason,” he said of his discussions with the board. “We were trying to organise in the best way the next preseason. I’ve said it’s not important if I’m here next season. At this moment, it’s important only the results.

“In this moment, only the Europa League is important. In this moment, Dynamo Kiev is everything. I am confident [of retaining his position] otherwise I wouldn’t be able to do my work. I have to think like this if I want to do my job in the next way.”

Chelsea are due to play two fixtures in Japan in mid-July, against the reigning J-League champions Kawasaki Frontale and, potentially, Barcelona. They are also considering holding a training camp in Europe, a retreat more in keeping with the preparations Sarri enjoyed at Napoli.

“I’m confident,” he added of his own future. “I was confident in the past, and I am confident now. But I want to think only about our performances and our results, nothing else.”

Dynamo Kiev, second in the Ukrainian league behind Shakhtar Donetsk, will pose an awkward threat in the last 16, though David Luiz has suggested recent setbacks have served to steel Chelsea’s resolve. The flurry of team meetings with Sarri in the midst of the poor run have seen slight tweaks made to the side’s tactical approach.

“You have to be intelligent and clever to find solutions,” the Brazil defender said. “We tried to find a solution in those meetings and I think we did that. You need to be strong to say the truth and we did that. That’s how we reversed the negative moment to a positive moment.

“You don’t change your character because of the situation, you change the situation. Sarri is a great human, someone with love and passion for football, loving with people and trying to help everyone, giving the best advice. When you lose a game, like we did [6-0] at Manchester City, no one is going to be happy and coming here joking around. He’s a real person and real people have feelings, good and bad. But we turned it round.”

1 Saudi Arabia-funded takeover of Newcastle United in serious doubt
2 Gerry Thornley: Home and away Six Nations could be its ruination
3 Decision expected next week on staging of College Football game in August
4 Kimmich floats Bayern past Dortmund and seven points clear at the top
5 Coming fourth in the Olympics didn’t change this fearless quartet, time did
Real news has value SUBSCRIBE
Crossword Get access to over 6,000 interactive crosswords