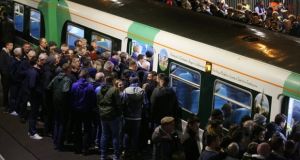 Football fans board a train at Falmer railway station after watching Brighton play at the Amex Stadium. Photograph: Gareth Fuller/PA

James Longworth waited and waited but then, on January 15th, decided he could wait no more. The Burnley supporter wanted to nail down travel arrangements for him and five friends to watch their team play at Newcastle this coming Wednesday and having found no reason why the game would be moved, he went ahead and did just that. Rail tickets bought. Job done. Or so he thought.

“One of our group called me on January 25th – a Friday – to say he’d heard our game against Newcastle was going to be brought forward a day,” said Longworth, a 29-year-old salesman from Accrington. “I told him that was impossible – I’d done all the necessary checks. But later that day Burnley put out a statement confirming that was indeed the case: we were playing Newcastle on the Tuesday instead.”

The reason for the change will come as little surprise to supporters who travel up and down the country to watch their team play – a broadcaster got involved. In this case it was BT Sport, which had a slot to fill after Manchester City v West Ham, which it had scheduled to show on Tuesday, had to be pushed back by 24 hours as a consequence of City’s involvement in the Carabao Cup final. BT Sport could have chosen to show live coverage of another of the games taking place that evening – Cardiff v Everton, Huddersfield v Wolves, Leicester v Brighton – but instead shifted Newcastle v Burnley from its Wednesday slot.

Asked to explain the decision, a spokesman for BT Sport said it could not show Leicester v Brighton as it had “already maxed out our Leicester picks”, but there were no reasons for not showing either of the other games, with the spokesman adding: “When making game selections we will always aim to choose the strongest game available for us.” In other words, Newcastle v Burnley was moved because, as a game which at the time was a genuine ‘relegation six-pointer’, it made commercial sense to do so.

It is often the way and unlikely to change given the influence broadcasters who pay to show live football in this country – BT Sport, Sky Sports and BBC – have on scheduling. But something can be done to help affected supporters, and that is what finally appears to be happening.

Following two years of campaigning by the shadow sports minister, Dr Rosena Allin-Khan, the government announced this month that it had agreed to work with the Premier League, British Transport Police and the rail companies to create a policy that would lead to people being able to purchase a train ticket to watch a game in this country that remains valid even if the game is moved. Allin-Khan calls it the Fans’ Fare travel scheme and, having received the backing of more than 100 supporters’ groups and the Football Supporters’ Federation, she will discuss it further with the transport minister, Andrew Jones, at a meeting on Tuesday.

“As a football fan, I know how frustrating it is when you organise rail travel to a game only for the date of that game to be changed,” said Allin-Khan, who in her meeting with Jones will call for supporters to be part of the discussion process for the new rail policy. The 42-year-old will also outline how it could work in practice.

“The [match-going]ticket could be bought online like any other rail ticket,” she told the Guardian. “The person buying it would need proof they are doing so to watch live football but that could be something as simple as a code issued by their club. In this day and age, a digital system to help with the necessary identification should be straightforward enough.”

The FSF shares Allin-Khan’s belief that supporters should be involved in the discussions regarding the new rail policy and has called for its scope to be extended beyond the top flight. As Malcolm Clarke, the FSF’s chairman, said: “There are almost as many EFL and National League games moved for TV as Premier League.”

The organisation’s chief executive, Kevin Miles, also has an idea regarding how the policy could work in practice: a supporters’ railcard. “You apply for it at the start of a season, perhaps through a membership scheme, and supporters display it alongside their original rail ticket whenever they undertake a journey caused by their team’s match being rearranged,” he said.

Another possibility is the system used in regions across Germany, such as Bavaria and North Rhine-Westphalia, whereby a person’s match ticket is also their ticket for use of transport in that area and remains so even if the match is rearranged. Whether that could work across Britain is hard to say but it is at least a potential solution to an undoubted problem.

Watching live football on these shores can be expensive and one way to keep costs down is by purchasing rail tickets in advance. The earlier they are booked the cheaper they are, hence Longworth organising his and his friends’ a month before Burnley’s trip to St James’ Park. And he got a decent price: £190 for six return tickets. Ultimately, it proved a waste of time and money.

“We booked the tickets with TransPennine Express and couldn’t exchange them for ones on the same train a day earlier,” he said. “So we’ve had to buy brand new tickets and apply for a refund on the original ones. As things stand, I’m not sure we’ll get it.”

There will be other fans, of Newcastle as well as Burnley, who have been hit in the same way, while other match-goers will have similar tales – including, almost certainly, followers of Leicester and Crystal Palace after their contest at the King Power Stadium on Saturday had been moved from a 3pm to a 5.30pm kick-off by BT Sport late last month and again because of its need to fill a slot created by Manchester City’s involvement in the Carabao Cup final.

BT Sport describes the process of scheduling fixtures as “extremely complex”, and although that is no doubt true there does at times appear to be a poor level of planning, and decision making, by the broadcasters, with a knock-on blow felt by those who help make “the product” what it is. As Longworth put it: “It’s match-going fans who generate the atmosphere that makes English football so watchable.”

“We welcome this issue being addressed,” said Miles. “It’s a longstanding one that has got worse as more games have been televised across more kick-off times. Not for the first time, supporters feel they are being taken advantage of.” – Guardian service