Unhappy birthday for Madrid as season ends in one nightmare week 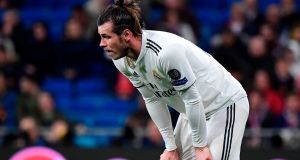 Real Madrid’s Gareth Bale watches on as his side crash out of the Champions League against Ajax at the Santiago Bernabeu stadium in Madrid. Photograph: Jaview Soriano/AFP/Getty

Today is March 6th, Real Madrid’s birthday, but there is nothing to celebrate.

This week has been the worst in their 117-year history: three home defeats, eight goals conceded and just one scored, all three competitions gone, one after the other – knocked out of the Copa del Rey, the La Liga title race, and the Champions League.

The 4-1 humbling at the Bernabéu by Ajax on Tuesday night saw Real lose their grip on a trophy they have held for three years. The predominance over their greatest rivals held for 87 years is also gone.

For the first time since 1932, Barcelona have won more clásicos than Madrid, two victories in four days last week leaving the all-time record at 96-95. For the first time too, a home team holding a 2-1 first-leg victory went out of the Champions League.

Madrid are used to breaking records, but not like this. Four home defeats in a row – before Barcelona beat them twice came Girona – equals their worst run. Six times they have been beaten at the Bernabéu, a fortress now easily stormed. To add injury to insult, Vinicius, who hobbled off the pitch in tears, has torn ligaments in his right ankle and will not play for up to two months.

There was little else he could say and if he lamented those things that went against his team, from posts to injuries to the VAR verdicts, there was no escaping reality: Madrid were not good enough.

“We lost it all,” Dani Carvajal said, bewildered on the touchline. He paused, trying to find the words, on the verge of tears, and added: “We lost it all at home. Our season is practically over.”

This point in March is too soon for it to end: Madrid will not play a game that really matters for almost six months.

“Here lies the team that made history,” said a funereal Marca. Three consecutive Champions Leagues, four in the last five years, make the era that closed here against Ajax the second greatest in European Cup history, after Madrid’s own between 1956 and 1960.

“What we did will be remembered for a long time,” said the centre-back Nacho, and he was right. But perhaps that was part of the problem. Madrid’s collapse began amid the celebrations.

So much has happened so quickly, even if that actually serves to reveal that the rot at Real runs deeper. The final whistle had barely gone in Kiev last season, Madrid European champions for a third year in a row, when Cristiano Ronaldo, his relationship with the club long since broken, announced he would be leaving.

Within a few minutes, Gareth Bale said that he might be going too. Within five days, Zinedine Zidane, the coach who had arrived in a time of crisis and won it all, was gone.

Under the Frenchman, Madrid had clinched a title every 16 games on average, yet he walked away.

“It’s a sad day,” the club’s president, Florentino Pérez, said. “It’s not a sad day for me,” Zidane retorted. “It might look like a strange moment, but it is the right moment.”

Madrid had not planned for this. They sought an alternative, but most candidates said no. Under pressure and in a hurry, Madrid signed their fourth or fifth choice, the Spain manager Julen Lopetegui, two days before the World Cup began. Spain sacked him and 138 days later, he was gone from Madrid too.

Zidane had left for a reason. Last season, Madrid were European champions, but they finished third in La Liga, 17 points behind Barcelona, some of the structural and cultural flaws disguised by that success.

Over the last few seasons, the squad has got slowly weaker, spending reduced as a response to a new economic reality. This summer, a World Cup year, they took a step further. After nine years, Ronaldo’s departure was always likely to be the most damaging of all even if few imagined it would be quite this devastating.

“Some players had to step up; not score 50 a season [like Ronaldo], but 20,” Luka Modric said. But Madrid’s players did not hit that target and are running at a goal a game fewer than last season.

“That’s our biggest problem,” the Ballon d’Or winner said, but it is not Madrid’s only problem, and the players left are better than this, or should be. “None of us have been at our level, myself included,” Toni Kroos admitted.

If this day had to come eventually – Madrid couldn’t win the European Cup indefinitely – no one expected it to end like this, except perhaps Zidane and even he did not foresee a decline of such magnitude. There is nothing to play for in the next six months, but much to do, including hiring a new manager – another one.

Lopetegui began with European Super Cup defeat against Atlético and ended with a 5-1 hammering by Barcelona in October. Solari was appointed on the basis of one outstanding quality: he was in place. He was appointed “temporary” coach but federation rules only allow clubs to have interim managers for two weeks. If Solari stays to the end of the season, it will only be because there is nothing to play for and no point burning anyone else.

“Madrid have more suitors than Julia Roberts, ” Solari joked darkly this week. José Mourinho’s name has emerged again, amid an urge to throw everything out, tear it all up and begin again, and sign big.

The president has long wanted to clean out some of the dressing room heavyweights and considers the former Manchester United manager capable of doing that, but Pérez also knows the risks. He knows the finances, too; signing galácticos is no longer the sole preserve of the Spanish giants.

Outside the Bernabéu, as Madrid’s worst week ended on Tuesday night, some fans chanted for Pérez to leave. Others for Mourinho to come. Most, though, made their way home in resigned silence. Those days were good, but they were gone. Inside the ground, Ajax’s fans sang Always Look on the Bright Side of Life.