International indecision nothing new for McCarthy

As he prepares to name his first Ireland squad, McCarthy could be forgiven a sense of déjà vu 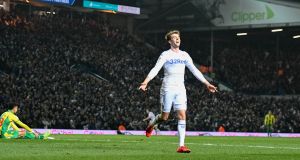 As Mick McCarthy prepares to name the first senior squad of his second spell in charge of Ireland on Thursday, a meeting with Leeds United’s Patrick Bamford is apparently still only pending. And Southampton’s Nathan Redmond, who turned 25 today (birthday wishes, FAI?), is proving even harder to pin down.

That might all work out well enough for Pádraig Amond, who is expected to get a look in for the first time, but it must be frustrating stuff for the Ireland boss, even if those with good enough memories to recall the start of his first crack at this job 23 years ago will appreciate that it all has a fairly familiar ring to it.

As he prepared to name his squad for the friendly against Russia in March 1996, McCarthy was eyeing up Spurs striker Chris Armstrong as well as South African born Sean Dundee in the hope that one or both might provide the sort of attacking pace that had been lacking through the tail-end of the Jack Charlton era.

And for those who believe that hints of indifference or chronic cases of indecision on the international front are new phenomena, it is worth reading back over the quotes from Armstrong. The striker knew McCarthy from the brief spell they had worked together at Millwall, but seemed unsure as to whether he even could end up playing for him again. And that was before we got to the question of whether he wanted to.

“It’s far from certain that I’ll be involved with him,” said the then 24 year-old who had, two years previously earned one England B cap and declined the opportunity to play for Nigeria at the World Cup. Wales had also wanted him at one stage but the striker’s preference was fairly clearly to play for the country of his birth.

“When my name was first linked with Ireland last year, I said I wasn’t clear if, in fact, I was eligible, and it’s still not clear. Two people from the FAI said they would look into the matter for me, but that was the last I heard from them. I suppose if they had good news they would have been back to me. I’m not aware of any Irish connections in my family, but if they can show that I have, I’ll be interested to hear from them.

“But even if I am qualified, I’ll still have to give it a lot of thought. I’m having a good season with Tottenham, and it has probably pushed me a little bit higher in the England pecking order. There are so many good players available to Terry Venables that it’s never going to be easy to get into the team. That makes Ireland an attractive option, but there are things, apart from football, which come into it. And that’s what makes it difficult.”

His reticence didn’t seem to entirely deter the new Ireland manager, with McCarthy observing that: “Fortunately or otherwise, he’s having a big season at Tottenham and that, inevitably, will have pushed him into the thoughts of Terry Venables. It’s hard to compete with that, but one thing’s for sure I’ll give it a go.”

In the end, it turned out that Armstrong didn’t actually qualify for Ireland and he only ever made one senior England squad, three years later under Kevin Keegan, who didn’t even play him.

McCarthy went to see Dundee play for Karlsruhe, meanwhile, but didn’t manage to speak with him that night. When The Irish Times managed that much later by phone it was pretty clear he had no interest.

As the search for new talent continued, McCarthy joked that: “I think all these great grandparents (the connection in the cases of both Armstrong and Dundee) were a bit inconsiderate actually, not flying back to Dublin to have their children here. If that had happened, I’d have a lot more to choose from.”

Still, a slow but significant shift was initiated over the months then years that followed. Having handed 19 year-old Shay Given his debut in his first game (after Alan Kelly’s withdrawal), Kenny Cunningham, already 24, was one of three new faces in the manager’s second squad, for a friendly in the Czech Republic. Gary Breen and David Connolly followed soon after and Ian Harte also made his debut by the end of the year.

As Paul McGrath, Ray Houghton and John Aldridge made their last appearances for Ireland in ‘97, Lee Carsley and Kevin Kilbane progressed to the senior side and a year after that the case for Damien Duff and Robbie Keane had become unanswerable.

By then, McCarthy had survived the sort of slow start - seven games without a win - that is simply unthinkable now. This time there aren’t eight friendlies to be used as preparation for the qualifying campaign and the manager is already scheduled to be moving on again in two years time.

Still, the suggestion is that overhauling the squad will take time and despite the fact that McCarthy does not have a lot of that on his hands, last week’s progress report on the recruitment side of things suggests that the list released tomorrow might well have a familiar feel to it.