Goals from accidental handballs to be ruled out from next season

Other changes relate to subs leaving the field, and opposition players in defensive walls 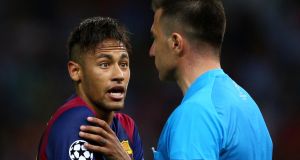 Neymar confronts the assistant referee after his goal was disallowed during the Champions League final between Juventus and Barcelona in 2015. Photograph: Paul Gilham/Getty Images 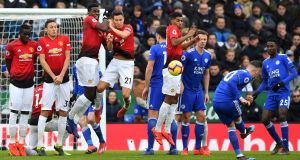 James Maddison of Leicester City sees his free kick come back off the wall against Manchester United in February. Photograph: Ben Stansall/AFP/Getty Images

Goals will be disallowed for accidental handball from next season after the game’s lawmakers reworded the rules.

Previously, goals would have been allowed if a referee had deemed a hand had accidentally helped the ball into the net.

But the International FA Board (IFAB) voted to “fine-tune” some laws at its annual general meeting in Aberdeen on Saturday, and among the changes was an attempt to end confusion over “deliberate” contact with the ball.

“On the topic of defining handball, a decision was taken by IFAB to provide a more precise and detailed definition for what constitutes handball, in particular with regard to the occasions when a non-deliberate/accidental handball will be penalised,” read an IFAB statement.

IFAB technical director David Elleray told Press Association Sport: “This is a case where the law is catching up with what football expects to happen.

“When Neymar’s goal in the 2015 Champions League final was disallowed because he headed the ball on to his arm, everyone agreed that that was the right decision.

“Everybody that is apart from about 100 referees, who were correct in claiming the goal should not have been ruled out because it was accidental handball.

“The previous ruling said handball was a deliberate action and the law has been rewritten to reflect what is already happening in football.”

In other changes approved by IFAB, substitutes will have to leave the pitch at the nearest goalline or touchline instead of walking to their technical area, in a bid to stop time-wasting.

Other law changes include changing the dropped-ball procedure, giving a dropped ball in certain situations when the ball hits the referee and the goalkeeper only being required to have one foot on the line at a penalty kick, IFAB said.

Another new rule will no longer allow an attacking player to stand in the wall next to defenders at free-kicks after a one-metre “exclusion zone” around the wall was also approved.

“It leads to confrontation, as the attacking players try to force a gap in the wall and delays the free-kick because the referee has to stop all the pushing and shoving,” Elleray added.

IFAB comprises the four home nations, who each have one vote, and the world’s governing body, Fifa, which has four votes, while rule changes need at least six votes to be approved.

The law-making body also acknowledged that the introduction of video assistant referees (VAR) had been a big success.

“Following the historic decision taken a year ago at the 132nd IFAB annual general meeting to approve the use of VARs, Fifa president Gianni Infantino in unity with fellow members of the IFAB expressed their satisfaction with the significant impact and success VAR has had,” IFAB added.

“Partly as a result of its success in the 2018 Fifa World Cup in Russia, VAR is now an accepted part of football and has brought greater fairness to the game without any significant interruption, with reviews on average taking just over a minute once every three games.”