Quinn on target as Ireland get better of Wales

Arsenal defender scores the only goal in Marbella friendly 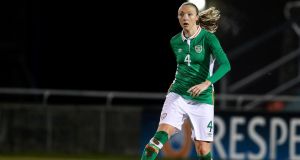 The Irish women’s team has won the second of its friendly games against Wales in Marbella with Louise Quinn scoring the only goal of a tight game to give Colin Bell’s side the victory.

Bell made just one change to the line-up that started the scoreless draw between the two sides on Thursday with Claire O’Riordan, who came on for Megan Connolly just before half-time last week, starting in her place this time.

With the heat a factor, neither side created much by way of clear cut chances before the break. Having gone close with a shot in the 61st minute, however, Quinn gave Ireland the decisive edge a few moments later, Heather Payne won a free out wide close to the corner flag, Tyler Toland produced a perfectly weighted delivery and the Arsenal defender out-jumped everyone to head the ball powerfully back towards the bottom right hand corner.

The game, and wider trip to southern Spain, is part of the team’s preparations for the Euro 2021 qualifiers which start in September with a home game against Montengero. Next up, though, is an away friendly in Italy.

“It’s a fantastic victory for the team and I’m absolutely delighted with the players. I felt we struggled with the Welsh press in the first-half but really kicked on after the break and deservedly won,” said Bell afterwards.

“It’s a huge confidence boost for the team of course, heading into those qualifiers in September. Wales are a second-seed so it shows we can mix it with these teams and get results against them, which is what we need to do to qualify for a major international tournament.

“The effort, the commitment and the desire from every single member of the team throughout was exceptional and we look forward to our next camp in April when we head to Italy.”

The Irish Under-15 boys, meanwhile, drew 1-1 with Cyprus in Sotira where Ben Quinn, a nephew of senior internationals Stephen and Alan, got Ireland’s goal.

1 Cheltenham faces criticism after racegoers suffer Covid-19 symptoms
2 Andrew Conway diary: In search of a competitive edge
3 Avoid the treadmill at all costs – marathon training in the 2km radius
4 BBC to draw from well of nostalgia during barren months
5 Sonia O’Sullivan: Taming The Tan gave us one last roll of the dice before shutdown
Real news has value SUBSCRIBE
Crossword Get access to over 6,000 interactive crosswords