Rory Smith: Will we recall Ibrahimovic the player or the character? 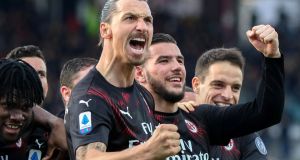 By this stage, Zlatan Ibrahimovic presumably has the image stored somewhere on his phone. You will have seen it, almost certainly; the one with Ibrahimovic, in profile, dressed in an angel’s robes and arm wrestling – a look of beatific concentration on his face – with a sinew-straining devil.

He used it first, if memory serves, when he signed a new contract with Manchester United in 2017, a summer after the move to England that was supposed to represent his swansong. The iconography is a little unclear: Ibrahimovic was committing himself to United – known to everyone except its own fans as the Red Devils – but, in the picture, he seems to be in competition with the devil. Angels and devils are, after all, traditionally on different sides of the argument.

He rolled it out again a few weeks ago, toward the end of December, when he confirmed his long-anticipated return to Europe from Major League Soccer, this time with AC Milan: another team that plays in red and black, another team that is known, though less officially, as the devils.

It is hard to date, precisely, when this schtick started. Ibrahimovic has certainly always been an outspoken character, unafraid to let the world know how he is feeling. He has never, even as a callow teenager at Malmo, his hometown club, been in any doubt as to just how special he is. He is, by nature, given to braggadocio and hyperbole.

The personality of Ibrahimovic is not the same as the character of Zlatan, though. That started – at a rough guess – with the publication of his memoir, “I Am Zlatan,” in 2011.

In retrospect, that book marked something of a sea change. It was the moment Ibrahimovic did away with any attempt to resist his reputation as an egotist and decided to lean into it, to not just be Zlatan but to play him, too. It was the moment he started talking about lions.

Like the image of the Angel Zlatan, the lion is a leitmotif in many of his public pronouncements. His Instagram biography reads: “Lions do not compare themselves with humans.” It is a quote he conjured in a television interview while he was playing for United. He is clearly very pleased with it.

The decision paid off, of course. Ibrahimovic, for a long time, was regarded as something of a flat-track bully: a star for teams who could crush all of their domestic opponents but were unable to shine on the grandest stages. He will retire without winning the Champions League. He never scored a goal in a World Cup.

In recent years, though, that perception of him has – correctly – changed. England was always the last bastion of cynicism about Ibrahimovic. Scoring four goals in a friendly for Sweden in 2012 helped quell much of that resistance, and his displays in his two years at United, even late in his career, eliminated the rest.

But what England really fell in love with was not Ibrahimovic, the striker, but “Zlatan” the cartoonish character, the marketing creation, the content provider.

England loves eccentrics, but increasingly, and much to the nation’s detriment, it also loves banter: an entire country, putty in the hands of anyone who says something outrageous enough to bring the lols. (For further evidence, please see: The British General Election, 2019.)

It was that second wave of viral fame, as much as his gilded resumé, that made him such a coup for MLS. David Villa is a peer of Ibrahimovic’s in many ways, but when he arrived in America he did not warrant a series of grandiose full-page newspaper advertisements declaring his intention to conquer a city.

It would be interesting to know how much of this is accident, and how much design, how much of the public relations strategy – and make no mistake, “Zlatan” is in some part a PR campaign – is organic, an amplified version of Ibrahimovic’s own persona, and how much is confection.

It has always felt as if Ibrahimovic is in on the joke, delivering the lines with a smile and a wink, but it is impossible to be sure.

Over time, it has become easier to believe that he is not. It has been nearly a decade since his book was published: nine years of nonsensical pronouncements and clever lines and comparisons with apex predators. The schtick is starting to wear thin. At some point, even those who are still laughing will realise that the joke wore off some time ago.

Perhaps it will not matter by then. Ibrahimovic will have retired. He will have drawn every last drop from both his talent for playing a game and his talent for playing a role. But perhaps it will matter. Perhaps, when we come to remember him, we will remember the character, and not the player. Perhaps we will remember the joke, and not why it was funny. – New York Times

1 Saracens to accept second 35-point deduction and effective relegation
2 Welcome to Iten in Kenya – home of champions and cheats
3 How do Klopp’s Liverpool measure up against greats of past?
4 Sonia O’Sullivan: How did Melbourne become the world’s most polluted city?
5 Shane Lowry’s Abu Dhabi defence crumbles in the sand
Real news has value SUBSCRIBE
Crossword Get access to over 6,000 interactive crosswords