Robbie Brady could yet choose Burnley over Crystal Palace 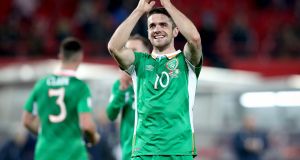 Ireland’s Robbie Brady is on the verge of leaving Norwich. Photograph: Ryan Byrne/Inpho

On a day when the biggest actual transfer the Premier League could muster was Mauro Zarate’s €2.5 million move to Watford, the handful of Irish players attracting interest continued to weigh up their options; however, Robbie Brady’s departure from Norwich did at least become an inevitability after the club set their price, around €10.5 million plus add-ons, by agreeing a deal with Crystal Palace.

The Londoners appear a little uncertain themselves as to their next move amid suggestions that by bidding for Brady they are covering themselves in the event that Patrick Van Aanholt fails a medical but their move for the Irishman appears to have nudged Burnley into action and Turf Moor again looked to be marginally the 25-year-old’s most likely destination on Wednesday evening.

Brady’s heroics in an Ireland shirt leave many here wondering why the pursuit of the player has not been a little hotter and the price a little higher but the reaction from Norwich City fans on social media when the rough detail of the Palace deal emerged – the fee could reach around €13.5 million – was almost universally positive, with almost everybody wishing the Dubliner well but welcoming what they saw as a good bit of business for a player who had never quite delivered as consistently as they had hoped.

Sam Allardyce might fancy his chances of getting more out of the versatile left-sided player, as Martin O’Neill certainly has, but if the choice is his, as seems to be the case, Brady might just prefer the 10-point gap that Burnley have put between themselves and third-from-bottom Palace, especially as he has made something of a habit of being relegated (with Hull and Norwich) in recent seasons.

Meanwhile, for around the sixth straight day, Conor Hourihane’s proposed move from Barnsley to Aston Villa appeared to be on the verge of completion.

The 25-year-old has been so widely reported during the past week to be arriving in the midlands for a medical only for nothing to happen that there have been suggestions it might be an NHS job that’s on offer.

Barnsley, though, appeared to be making an effort to replace the 25-year-old Corkman by recruiting Matty James from Leicester City on loan until the end of the season and despite reports that Sheffield Wednesday have not given up hope of hijacking the deal, Hourihane is still expected to complete a move.

Scott Hogan is also still expected to end up at West Ham, despite the Premier league outfit’s apparent determination not to meet Brentford’s valuation of the striker.

Refused to go on loan

Robbie Keane’s destination is far less predictable but speculation that he might be about to join Sunderland – to whom James McCarthy is said to have refused to go to on loan – seems a little unlikely.

Another possibility being mentioned is Preston, where Andy Boyle is still aiming to win a first-team place. “I have to try and break into the team,” said the former Dundalk defender. “It’s difficult at the moment because the lads are doing so well but it’s something that I’m aiming towards doing and hopefully I can do that in the future.

“I’ve been here three or four weeks now and every day I’m getting better and feeling better in training. I think the next step is trying to get into the match-day team and see where it goes from there.”

Boyle was an unused substitute in the game at Aston Villa on Saturday. The club play Ipswich at home this weekend.