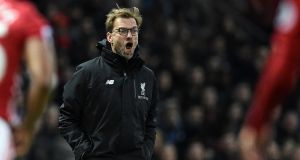 Jürgen Klopp accepts there is no point in talking of fighting for the title while it is still Chelsea’s to lose. Photograph: Oli Scarff/AFP/Getty Images

Liverpool stand one game away from a Wembley final, most probably against Manchester United, and a chance to present Jürgen Klopp with the first silverware of his time in England. The German is excited by the prospect – “I am full of energy, full of power” – but already he can sense the rest of Merseyside lagging behind his level of electricity.

The reason is not hard to discern. Liverpool have yet to win in the league in 2017, and points dropped at Manchester United and Sunderland, together with that deflating home defeat by Swansea City at the weekend, have taken the shine off a season that initially promised so much.

Klopp can still claim to be fighting on three fronts, and does, though if Liverpool are fighting a losing battle in the title race the enthusiasm for the other prizes falls away a little too. The manager claims not to understand this mentality, though in reality he probably has a shrewd idea of what a 27-year wait does to the priorities of a club like Liverpool and their supporters.

“You cannot just give up on a season when it still holds so many possibilities,” Klopp said before Wednesday’s League Cup semi-final against Southampton. “We are in two cups and we must fight for a place in the Champions League. We are still close enough to fight for nearly everything. Is anyone really saying that if we cannot be champions we cannot enjoy the season?

“We can improve on last season and that’s what we should all be aiming for. That is what I would regard as taking the next step. And if this is a long-term project, obviously that means we need to make a few steps. As long as we keep developing, that’s fine for me.”

The good news for Klopp is that some of the positivity he seeks should return if Liverpool can survive their next two cup ties – Wolverhampton Wanderers are at Anfield in the FA Cup on Saturday – and put a dent in Chelsea’s lead at the top of the Premier League when the London side come to Merseyside on Tuesday.

The bad news is that Liverpool have looked ominously flat in their past few matches. One theory is that Klopp and his coaches are still coming to terms with mid-season fixture overload when they are used to a winter break, and were outplayed in the first leg at St Mary’s to an extent that many felt they were lucky to escape with defeat by just a single goal.

“Who expects to play their best football in the middle of January?” Klopp said. “Just look at the weekend. Did Chelsea have 20 shots on target? No. Arsenal won in the last minute. Tottenham I think had already lost but then came back into the game because City didn’t use all their chances, didn’t get a penalty and all that stuff. We all have the first part of the season in our legs. If we were fresher now than in August or September we would have done everything wrong.”

Even victory against Antonio Conte’s side when league football resumes would only cut Chelsea’s lead over Liverpool to seven points, and Klopp accepts there is no point in talking of fighting for the title while it is still Chelsea’s to lose.

“If Chelsea keep winning they will be champions,” he said. “We cannot do anything about that but we can still fight for the rest. Chelsea went on a run of 13 wins and that is pretty difficult for anyone to deal with, but it is not our fault. We played them once and beat them so we are not responsible for their position.

“If they win the title, good luck to them, but if it is only possible for one team to be really happy about the season then what are we doing? It is a crazy world in this moment but it shouldn’t be that crazy. Yet even if we manage to beat Southampton and reach Wembley, someone will still be unhappy because we lost the last Premier League game.”

Liverpool lost against Manchester City in the League Cup final last season, which gives Klopp clear scope for improvement in a competition he takes seriously. “We wanted to win last year when we reached the final, and this time we would like to get to Wembley and win it,” he said. “But the first step is to beat Southampton.

“We don’t judge this tournament, but if we play in it we want to win it. If you saw us celebrating after the quarter-final you would know how happy we are to be in a semi. We want to reach for the heights, whatever the competition, and when the game comes round we will be ready for it.” (–Guardian service)