Player will remain in hospital for the next few days 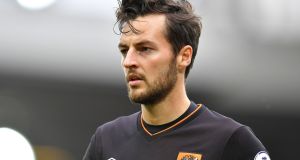 Ryan Mason has made excellent progress after fracturing his skull in the Premier League game against Chelsea. Photograph: Dave Howarth/PA Wire

Hull midfielder Ryan Mason is making “excellent progress” after fracturing his skull but will continue to be closely monitored in hospital, the Premier League club have announced.

Mason, 25, had surgery in London on Sunday night after sustaining the injury during a clash of heads with Chelsea defender Gary Cahill in the Premier League clash at Stamford Bridge on the same day.

A statement released by Hull read: “The club can confirm that Ryan Mason continues to make excellent progress after sustaining a skull fracture in Sunday’s game against Chelsea.

“He will continue to be closely monitored by staff at St Mary’s Hospital over the next few days, whilst also remaining in contact with our medical team to assess his progress.

“There will be no further updates from the club until there are any changes in Ryan’s condition.

“We also ask that people respect Ryan and his family’s privacy whilst he remains in hospital.”

Hull confirmed on Monday that Mason was conscious and communicating having been visited by captain Michael Dawson and three club officials.

The England international received treatment for around nine minutes on the field after his collision with Cahill in the 14th minute of Hull’s 2-0 defeat.