Philippe Coutinho commits to Liverpool until 2022 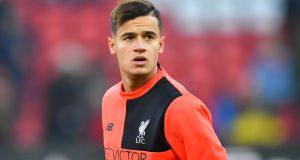 Liverpool manager Jurgen Klopp believes the club have made a significant statement in tying down “world class” Philippe Coutinho to new contract.

The Brazil international’s new deal is for five years, making him one of the club’s highest earners, and does not include a buy-out clause.

Coutinho has been highly influential this season, helping the side briefly go top of the Premier League in November, and his value to the side was evident when his near-seven week absence with ankle ligament damage coincided with their worst run of form of the campaign.

His performances had attracted the interest of Barcelona but the playmaker’s decision to stick with Liverpool and Klopp is a major coup.

“I think everyone knows what a great footballer Phil is, that is not in question — but not everyone sees what an incredibly positive character he is and what a big influence he is on the dressing room,” Klopp told liverpoolfc.com.

“I knew of Phil before I came to Liverpool and I was well aware of what a talent he was, but since arriving here I have not only witnessed his ability up close, but also his ever-continuing development.

“He is truly world-class — in that very top bracket.

“The fact he wants to stay here and be part of what we are looking to build and develop shows his personal commitment is to make himself better and be an integral part of something that is very special.

“We have total belief in our project, but when a player of Phil’s calibre and status commits for this length of time it shows that our faith is shared throughout the game.

“He knows he can fulfil his dreams and ambitions here at Liverpool. This is a big statement.

“I look forward to seeing Phil create many more great memories and moments for this club.”

Klopp’s impact since taking over in October 2015 was one of the factors which persuaded Coutinho his future lies at Anfield.

The Brazilian is enjoying one of his best seasons and, prior to his injury in late November, had scored six goals in 14 appearances as well as providing Liverpool’s creative spark.

“Jurgen is a great manager. We all can see how much he has changed here since he arrived — and how much he will change in future. He is a winner,” said the 24-year-old.

“It’s not only me, but every other player feels honoured to play at this great club for this great manager.

“This feeling has a very positive influence on us as players.”

Coutinho has become a crowd favourite since arriving from Inter Milan for £8.5million in January 2013 and that is another reason why he is happy on Merseyside.

“Ever since my arrival here, I was welcomed with open arms by the supporters — and everyone at this football club,” he added.

“This is an important factor that carries weight when you decide to remain here for a longer period — and this did have a lot of weight when I thought about the renewal of my contract.

“I can only thank every supporter for their faith in me. I really hope to repay them. I will do my very best on the pitch to create assists for my team-mates and score goals for us to try and win trophies and titles.

“It’s not just me — since me and my family arrived here we have been welcomed with open arms by everyone.

“We feel at home in this city, we feel a part of this city.

“It is a very important day for me, my wife and my daughter. I am happy — and everyone is happy at home.”

Liverpool’s success in securing Coutinho’s long-term future with the absence of a buy-out clause puts them in a stronger position than when former striker Luis Suarez signed his long-term deal in December 2013 only to move to the Nou Camp the following summer after the Catalan club met the figure required to release him.