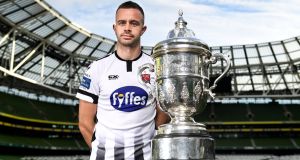 Dundalk’s Robbie Benson with the FAI Cup trophy at the Aviva Stadium in Dublin. ‘It’s been a hard one to take, missing so much of the season.’ Photograph: Harry Murphy/Sportsfile

Robbie Benson believes that he and his team-mates will have made a pretty good case for this Dundalk side to be regarded as the best of all time if they can lift the FAI Cup and become just the second ever side to complete a treble.

The great Shamrock Rovers side of the mid-1980s won four straight titles, the last three of them as part of doubles before Derry City became the first club ever to complete a clean sweep of the three major trophies.

Dundalk narrowly missed out on the four-in-a-row in 2017 but are halfway there again and their recent record of five titles, two FAI Cups and three League Cups is arguably the most intensive period of success ever. Matching Derry’s achievement on Sunday by beating Rovers at the Aviva Stadium would make the argument that they have now eclipsed the others that much harder to resist.

“If we win it will surely cement our place but even if we lose we are going to be in the conversation,” says the 27-year-old who is expected to sign a new deal with the club over the coming weeks. “And to be a part of that for four years, to have been a mainstay of the team even in that team . . . there is a huge sense of pride in that.

“In 50 years’ time, when people are looking back on the greats of the game I can say that I played with the likes of Gary Rogers in goal, Seán Gannon (seven league titles and counting) who is going to go down as one of the greats of all time, Brian Gartland, I’m going to leave players out here but [Dane] Massey, [Chris] Shields, Patrick Hoban who is the top scorer in the club’s history.

“People who have gone, Ronan Finn who I played with before, Stephen O’Donnell, Daryl Horgan, you can list them off but these are players who are going to be in that conversation about the best players who have ever played in the league and I just happen to be here playing with them at the same time.”

He shrugs off the suggestion that he might feel entitled to feature in the debate himself but says he is happy that his part in it all has been appreciated by the two managers he has worked under at Oriel Park. His contribution under Vinny Perth has been limited by two serious injuries, the first a broken leg sustained in the first league game of the season, the second a broken rib and punctured lung suffered in the first leg of the Champions league qualifier against Qarabag.

Somehow, he says, he would have taken it all to be in the position the club finds itself in now.

“It’s been a hard one to take, missing so much of the season but I think that if someone had said to me that for Dundalk to be in the cup final with two trophies in the bag you are going to have to break your leg on the first day and break a rib a bit down the road, I probably would do it,” he says, sort of laughing at the notion. “Who knows what might have happened the other way.”

The second setback involved a brief stay in hospital and the rest of the players apparently looked for a way to cheer him up. His status as the squad’s unofficial social secretary includes researching ways to keep his team-mates entertained on the road and he had mentioned having seen a game called crokinole. The chunky wooden board had to come from Canada and only arrived this week but Benson sees the gesture as another sign of the spirit around the place. He is clearly enthused by the latest way of passing time; something he took the opportunity of illustrating at the club’s press day by hammering first-team videographer Harry Taaffe in a demonstration game.

“They had forgotten that they had even ordered it but it really touched me when I walked in and saw it there,” says the midfielder who is clearly enjoying himself as he flicks draughts-like round wooden counters, through obstacles, off opponent’s pieces, and towards a small hole in a very big board.

“There are some card games too, along the lines of Mafia and Werewolf,” he says. “They would staples of the sorts of games that I would like, social deduction and strategy, hidden role-playing games . . . that’s what I like to do in my time and I’ve inflicted it on the rest of them.

“I had a hard time convincing the lads that these games would be entertaining but I’ve taken a few under my wing and there are a lot of intelligent lads here, footballers get a bad rep.”

There is, he says, a doubles crokinole tournament already lined up for Saturday night in the team hotel with Benson set to make the draw over the coming days.

“Yeah, that’s my role here at the club,” he says with a grin, “to provide the entertainment before the games.”

Rovers might well end up wishing he left it at that this weekend.