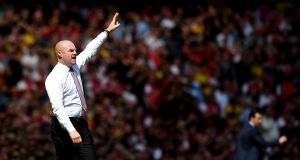 Burnley manager Sean Dyche. “The staff, the players, the board and chief exec know what we do, and I think the fans do too. They are the important parties.” Photograph: Michael Regan/Getty Images

A Frenchman, a Spaniard and two Belgians walk into a pub in Burnley. There is no punchline. The four are drinking in the Royal Dyche before Burnley’s win over Everton, and their presence gives a little demonstration of the impact close to four years of Premier League football and seven years of Sean Dyche have had on a club that takes neither for granted. Whether others outside Turf Moor recognise the scale of achievement is open to question.

“A number of years ago I used to think ‘does anyone recognise the enormity of where this club was to where it is now’?” says Dyche, who will mark seven years as the Burnley manager on Wednesday.

“But I’m really not that precious about it now. The staff, the players, the board and chief exec know what we do, and I think the fans do too. They are the important parties. We work authentically and honestly.”

Qualities that may appear unfashionable amid the glitz of the Premier League have made Burnley something of a role model.

Stéphane Blach, Camilo Guerra, Bernard Brasseur and Laurent Titeux are the overseas visitors for the Everton game. Work colleagues in Luxembourg, the four take in two Premier League matches over one weekend every year and have chosen Burnley for the second season running because, they insist, the atmosphere at Turf Moor is superior to most other stadiums visited.

And because they love the Royal Dyche, renamed last year after a joke about celebrating the Burnley manager if he took the club into Europe became a promise.

There can be no greater honour for the man whose face adorns the claret-and-sky-blue walls, the Henry VIII-style sign above the door and has even been carved into a tree stump in the beer garden.

“I don’t think we would have heard of Burnley if it wasn’t for the club being in the Premier League,” Guerra says. “We went to London for a few years, then Manchester and from there we discovered Burnley. It is amazing here. The people are super-friendly.”

The four were staying in Manchester, where they watch City’s defeat by Wolves the day after Jeff Hendrick’s winner against Everton lifted Burnley briefly into fourth place in the richest league on the planet.

Burnley cannot compete with Manchester or Liverpool as a draw for football tourists, nor does it measure itself that way, and the town centre is relatively quiet – numerous empty shops on St James’s Street reflecting problems nationwide – considering a Premier League game is an hour from kicking off nearby. Yet its football club continues to thrive, not merely survive.

Burnley’s Barnfield training ground, its pitches once prone to flooding, has been rebuilt and brought into the 21st century at a cost of more than £10 million. The club’s last published accounts, for 2017-18, showed a record profit of £45 million and no outstanding bank or directors’ loans.

A turnover of £139 million was the joint 13th highest in the Premier League and only two clubs had a smaller wage bill than Burnley’s £82 million. Wages have since increased but to progress in a league where Manchester United’s turnover and wage bills were £590 million and £296 million respectively that same season, and to do so for four seasons (one season more than Jimmy Adamson’s team enjoyed in the top flight in the 1970s), is testament to the meticulous planning and decision-making of Dyche and the Burnley board.

“The main thing you have to get right as a chairman is to pick the right manager,” says Mike Garlick, the Burnley chairman. “If you do that you are halfway there at least. Sean has been key. We had Eddie Howe before that but location-wise it just didn’t suit Eddie and his family, so it didn’t quite work out. Another great manager.”

Garlick is speaking in the London office of Michael Bailey Associates, the workforce project management and consulting company he founded in 1989 and now heads as its chief executive officer. His roots are unmistakably Burnley, however, and most of his fellow directors are from the area. The club’s success has been homegrown.

“I was born in the town, about 400 yards from the club,” the chairman says. “I went to school there, then went to uni and came to London to seek my fortune. When I was 18 I told my dad I wanted to be chairman of Burnley one day. He said ‘you must be bloody crackers son’.

“It was a lifelong ambition to do this. I think one of the reasons we do so well is that myself and the other directors are all fairly local and we all really care. We are not there to pick up a wage. No director gets paid. You get a night in a hotel paid for, but that’s it.

“I proudly state that I am the Premier League’s poorest owner. Everyone else is a billionaire, virtually. But I am proud of that and what we have achieved because we have had to sweat every asset both on and off the pitch to get the best from it.

“That means working really cleverly in the transfer market, looking for value – and if we don’t see that value we don’t buy. Sometimes that drives the fans up the wall but we have to have value in everything we do.

“It could be a young player that we think could do well for us and we could sell on for a profit or an older player we think could add value to the squad now. All we can do is live within our means. We don’t have the lowest budget in the Premier League any more – other clubs who have come up have a lower budget this season – but it is certainly not top half.

“I can’t go into real detail but we probably have the most aggressive bonus scheme in the league in terms of staying up and finishing higher up the Premier League. We stretch our players as much as we can on the pitch to achieve the best, and if they do that they get the rewards.”

Garlick recoils at the suggestion that Burnley have established themselves in the Premier League.

“No such thing,” he says, but chairman and manager are clearly aligned on what Dyche described as the “incremental improvements” that must be made in a fiercely competitive field.

“Priority number one was the training ground,” the chairman says. “Priority number two is probably to expand the corporate facilities because there is a long waiting list. One of the plans in the medium term is to build more executive boxes because we just haven’t got enough to meet demand. We are selling out every game … maybe refurb or rebuild some of the stands because some of them are quite ageing now, but we will do it slowly. It has to be when the time is right for us, but things will happen slowly but surely.”

One of the criticisms levelled at the Burnley board by supporters is their spending in the transfer market – or, indeed, lack of – with Chris Wood and Ben Gibson the club’s joint record signings at £15 million apiece.

“There are still challenges because we have to look at flexing the financial model because the game is outrunning us financially,” Dyche admits. “It is an ongoing challenge but if you looked at it on a piece of paper, about how to plan out a possible successful period, then I think we are a good model for how to build something.”

Garlick says: “We have seen so many clubs locally who have fallen on hard times – Bolton, Bury, even Blackburn to a degree. The fans don’t want that to happen to our club, so I think they appreciate the sensible approach. But ultimately fans want to win things. I’m a fan too. Managers always want to spend too because they are ambitious for themselves and for the club. We just have to be realistic, that’s all. We are a solid club now. We are profitable, financially healthy.

“Why can’t anyone else do it? I think it’s just sticking to your core principles and not wavering from them, and getting all the key decisions, such as the manager, right. Getting the right players to fit in with the team. Sheffield United, I think, have done very well over the last few years. Norwich, they haven’t spent a lot of money. Huddersfield did it as well. It is possible.”

Back at the Royal Dyche, Justine Lorriman, the owner responsible for the pub’s transformation from the Princess Royal, is preparing for her regular 2.55pm sprint to Turf Moor for the Everton game. Lorriman, a lifelong Clarets fan who travelled to all three away Europa League qualifiers in 2018, will be back behind the bar before 5pm, but measures the impact of four years in the Premier League on a much wider scale.

“We had a few Norwich fans in here recently who loved what we have done. They were saying that we are role models to them, that we are the club they are looking to be like and it’s really nice.

“We get the cliche of ‘you’re just a long-ball team’, or they don’t like Sean Dyche, but the point is we are still here four years later. We are definitely doing something right. We are an example for small-town clubs.”