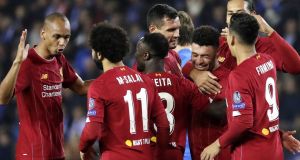 Alex Oxlade-Chamberlain had waited 18 months to experience the joy of scoring for Liverpool once again; 18 months in which he lost a year of his career to a serious knee injury, the chance to appear in two Champions League finals and to call himself a European champion. He ended the wait in sublime style to steer Jürgen Klopp’s side to a commanding and crucial victory over Genk.

Oxlade-Chamberlain struck twice, for the first time in a game for almost exactly three years, as the European champions gained the away win their manager had demanded. The second was beautiful, arched over Genk’s goalkeeper with the outside of his foot from distance, while Sadio Mané and Mohamed Salah completed the scoring as Liverpool recorded their first away win in the group stage since the 7-0 rout of Maribor in October 2017.

Liverpool fans have often called for a touch more creativity and invention from midfield in the Champions League and Klopp finally obliged by rewarding Oxlade-Chamberlain and Naby Keïta for their influential substitute displays at Manchester United on Sunday. The pair were handed rare starts against the Belgium champions and Oxlade-Chamberlain needed all of 111 seconds to repay his manager with the opening goal.

Oxlade-Chamberlain’s first Champions League goal since the quarter-final first-leg defeat of Manchester City in April 2018 followed a poor defensive clearance from the home side. Andy Robertson and Roberto Firmino reacted sharply to keep the pressure on and Oxlade-Chamberlain, given time to pick his spot from almost 25 yards, found the bottom corner of Gaëtan Coucke’s goal with precision. An open, defensively sloppy game had commenced. Worryingly for Klopp, both sides looked vulnerable and Genk passed up several excellent opportunities to level before the break.

A lack of solidity and communication may have been understandable in the visitors’ backline given the absences of Trent Alexander-Arnold and Joël Matip through illness and injury respectively. It was still a surprise how easily Liverpool were opened up whenever Genk had possession, and they did not have it often. James Milner was selected ahead of Joe Gomez at right back, something of a snub to the England international, with Dejan Lovren replacing Matip in central defence. But the gaps appeared across Liverpool’s defence.

Mbwana Samatta was played clean through on goal moments after Oxlade-Chamberlain’s opener by a simple clearance out of defence. To Liverpool’s relief he dragged a shot horribly wide. Moments later a clearance from the Genk right back, Joakim Mæhle, sent Paul Onuachu away from Lovren. This time the Genk striker’s shot was on target but Alisson was equal to it with a fine one-handed save low to his right.

Junya Ito then ran clear down the right only to lose his footing inside the penalty area. Ito’s next contribution was to deliver a dangerous cross to the far post that Samatta converted with an emphatic header as he steamed in above Milner. Genk’s celebrations were cut short by a referee assistant’s flag for offside. A lengthy VAR review upheld the decision and Liverpool were reprieved once more, and again when Samatta just failed to connect with another Ito delivery from the right before the interval.

The number of clear Genk chances was also a surprise given Liverpool’s dominance of the ball. Klopp’s side came close to extending their advantage when Mané played an exquisite one-two with Firmino, who played his strike partner through with a rabona chip on the edge of the area only for Coucke to save at close range. The Genk goalkeeper also denied Robertson from the angle following a delightful assist from Mané and Mohamed Salah, back in the starting line-up after an ankle injury, went close with a free-kick that narrowly missed the top corner.

Liverpool continued to dominate possession after the interval and, with their overall defensive display improved and Genk’s threat nullified, exerted greater control over the game. They were given the comfort of a two-goal cushion when Oxlade-Chamberlain beat Coucke again with a magnificent finish.

Keïta, an increasingly creative presence in midfield, instigated the second goal with a measured chip into Firmino as he darted into the area. The Brazil forward laid the ball back out to the waiting midfielder who clipped it first time with the outside of his right foot over the Genk goalkeeper and in off the underside of the bar.

Oxlade-Chamberlain was side-on to goal when he connected. It was the goal of a confident player, a reward for perseverance through an horrendous injury, and he departed to a standing ovation from the Liverpool section when replaced by Georginio Wijnaldum.

Mané sealed Liverpool’s first away win in the group stage for over two years at the end of another flowing Liverpool move, this time involving Firmino and Salah after Wijnaldum had regained possession in midfield.

Salah released the Senegal international behind the Genk defence with a perfectly weighted pass and the striker lifted a fine finish over the on-rushing Coucke. He returned the compliment by setting up Salah for Liverpool’s fourth, although in truth the goal was entirely of the Egypt international’s own making as he collected the pass inside the area, spun away from his marker and found the far corner to strengthen the European champions’ position in Group E.

The substitute Stephen Odey’s late response angered Alisson at the loss of a clean sheet but no more. – Guardian