Power unaware of any Waterford takeover bid from John Delaney 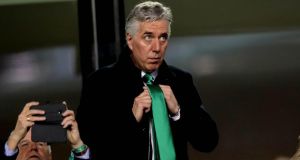 Waterford’s owner, Lee Power, says he is unaware of any bid by John Delaney to lead a takeover bid for the League of Ireland club with the 47-year-old saying he has not spoken to the FAI’s former chief executive since he parted company with the association.

Rumours that Delaney was attempting to put together a consortium to buy the club from the English-born former Ireland under-21 international have been circulating for at least a week but Power told The Irish Times on Tuesday that there has been no approach from Delaney, who recently agreed a pay-off with his former employers believed to be worth around €500,000.

Power’s commitment to the club he bought a couple of years ago has been the subject of speculation since they missed out on a place in the Europa League this season over a licensing issue. Having finished fourth last season, Alan Reynolds’s side slipped significantly over the course of this campaign, although a recent run of four wins in five Premier League games ahead of Friday’s defeat in Ballybofey did get the club well clear of the relegation zone.

In a brief response to a query regarding the possibility of a Delaney-led takeover, though, Power gave no wider indication of his intentions, simply stating that there had been no contact and that he was unaware of any interest.

The notion of Delaney returning to the game in any prominent way would have been a remarkable development and even the suggestion of it had certainly caused some consternation. But it is believed that such a move may well be prohibited under the terms of the departure deal from the association.

Delaney had played a part in Power taking control of Waterford, the club where Delaney himself had once been involved, although the former striker seems to have been attracted by the overall package on offer.

One of the key things was fairly achievable access to European football, something the association’s competitions director, Fran Gavin, says continues to help generate interest from outside the usual football circles.

“I think what’s happening is that people are seeing a value in the league,” said Gavin. “And I think what’s attractive for them is the four places in Europe and how that can be achieved.

“I think the climate is different and the country is doing that bit better and there is a few more bob about the place. But there have also been positive changes at the clubs themselves.

“Some of the bigger clubs are no longer having to worry about next week’s wages; they are in a position to give two- and three-year contracts, they are looking at youth development, which is by its nature, a longer-term thing, and all of that is giving them head space to think about the broader value of the club.

“And some of the people investing time or money into clubs now are very shrewd commercially,” added Gavin, with Dermot Desmond is in the process of investing around €2 million in Shamrock Rovers.

“They are bringing a different set of skill sets in. That’s not a bad reflection on the people who were there for years, but it is different and that’s good.”

Several of those investors, like Garrett Kelleher at St Patrick’s Athletic and Mike Treacy at Dundalk, have played leading parts in the push for the clubs to assert greater independence from the association and both have expressed support for the all-island league proposal being championed by Kieran Lucid, something that will be the subject of a meeting of clubs from across Ireland in Dundalk on Thursday.

Gavin is adamant that after so many years of Delaney having called the shots for all concerned from Abbotstown, the association is now completely happy for the clubs to decide their own future.

“It’s a journey that the clubs are on separately with Kieran and it is going to be interesting to see how the meeting goes. As an observer, and that’s what I am, it [the current process of clubs assessing their various options] is being driven by the clubs who are very much more aware now of their own value.

“But it will bring challenges to the clubs too because if you are centre stage like this, making the decisions, then you have to be aware of the overall picture all of the time. And you need to get above how your club is positioned in all of this, how it is going to impact on your club. That is going to get a bit of getting used to.”

The former PFAI chairman puts the change of outlook at the FAI down to Mooney who, he says, “has a very different ethos to the previous CEO”. Both men have cautioned against a return to the days when internecine infighting among clubs seriously hampered the effective running of what had been a far more independent league, with Mooney calling for a strong centralised structure to any new league, and a strong CEO.

Gavin, meanwhile, says he believes that the situation at Limerick will be progressed within a matter of weeks, suggesting that Pat O’Sullivan has accepted he needs to step away and at least two parties having expressed an interest in taking the club over from its examiner.