Philippe Coutinho is key for Liverpool and won’t go easily 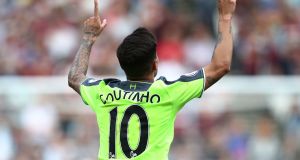 As Philippe Coutinho departed from the pitch on a warm afternoon in east London, his 89th-minute substitution met by raucous applause by those in the away end, he was embraced by Jürgen Klopp. Nothing surprising there given the frequency with which the Liverpool manger hugs his players, but this one felt a little different: tighter, longer, stronger. A thank-you in physical form and perhaps even the warmest of pleas to the Brazilian to stay.

In the past week Coutinho has again been linked with a move to Barcelona, despite having signed a new five-year contract with Liverpool in January, with the city’s leading daily newspaper Sport running a front-page headline on Tuesday that suggested in unequivocal terms that the player has agreed a €90 million move to the Camp Nou in the summer. Liverpool insisted he is not for sale but the rumours refuse to die and will have only grown on the back of how the 24-year-old performed against West Ham United. He was brilliant and the hope for Klopp must be that, having contributed greatly to the club in all but securing a return to the Champions League, Coutinho will deem his future does indeed lie on Merseyside.

The midfielder certainly looked content on an afternoon in which he scored two goals, set up another and generally dazzled with masterful technique, stunning vision and ruthless finishing. Those in claret and blue could not tame him and if there was one image which summed up the torment it was probably that of James Collins standing flat-footed and looking clueless as Coutinho cut inside him before lashing the ball past Adrián to make it 3-0 on 61 minutes. Slaven Bilic must have felt tempted to reach for the nearest white towel and throw it on the pitch.

It would be wrong to suggest Coutinho was the only one who shone for Liverpool in a 4-0 victory that leaves them requiring just one more win, against Middlesbrough on Sunday, to guarantee a top-four finish. Theirs was a collective pummelling, with Daniel Sturridge, Adam Lallana and Georginio Wijnaldum among those who also caught the eye. But the star was yet again Coutinho, and what was intriguing about the number 10’s contribution was that it came from a number 8 position.

This season Coutinho has most often lined up on the left of Liverpool’s three-man attack. Here, though, he was positioned on the left of a diamond midfield as Klopp reverted to a two-man attack consisting of Sturridge and Divock Origi, who completed the scoring yesterday on 76 minutes. Klopp had hinted at the tactical switch on the eve of this match, suggesting Coutinho could have “more influence” from a deeper position.

Marked less tightly, Coutinho made his presence felt from the outset and it was his defence-splitting pass on 35 minutes that opened the scoring for Liverpool as he set Sturridge free to score his first goal since January 2nd.

From there the Brazilian continued to menace West Ham and on 57 minutes he scored his first of the afternoon, gliding past Havard Nordtveit and Winston Reid before drilling a right-footed shot into the far corner. Coutinho’s second four minutes later came via a breakaway that he led on the halfway line and took the Brazilian’s tally to 12 in the Premier League for the season which, allied to his seven assists, makes this his most productive campaign since he arrived from Internazionale in January 2013.

“It was obvious Phil can play this,” Klopp said when asked about Coutinho’s performance from a deeper position. “If he starts on the wing he’s often in this position – he’s always a playmaker and it’s not interesting where he’s coming from; he needs to be in the decisive area, shooting and finishing situations.”

Seasoned Liverpool watchers will already have been aware of the damage Coutinho can cause from a midfield role given that is where he mainly performed during the 2013-14 season, excelling as Brendan Rodgers’s men came close to winning the title.

As Klopp states, it is a base from which he can move into different areas and what is so mesmeric about watching the Brazilian perform is how he can do something by doing nothing, dropping a shoulder and standing still, forcing defenders off balance before gliding past them. He is a captivating talent who Liverpool must keep if they are to progress domestically and, almost certainly now, make their mark in the Champions League next season. Barcelona’s advances will remain strong but the message from Anfield needs to be straightforward: our main man is going nowhere.