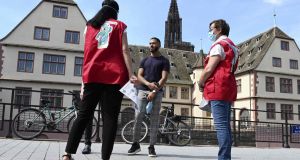 Mediators from the Strasbourg City Hall talk to people in the street about the prevention of coronavirus. Photo: Frederick Florin/AFP via Getty Images

Officials in Strasbourg have appealed for hundreds of spectators who attended an illegal football match at the weekend to be tested for Covid-19.

The authorities fear a second wave of the pandemic in one of France’s worst-affected regions. They have called on the estimated 400 people who took part in or watched the game to go to a testing centre set up at the European parliament building where they will be screened anonymously and without an appointment.

The match was played on Sunday between teams from two of the city’s districts – Neuhof and Hautepierre – in a local stadium in defiance of rules that limit public gatherings to a maximum of 10 people.

“We must absolutely avoid another virus cluster in Strasbourg and protect those who took part as well as their families,” said the local prefect, Josiane Chevalier.

She described the event as “incomprehensible, irresponsible and very serious”, but said the aim of the massive testing operation was not punishment. “This isn’t a trap. Our number one priority is health,” Chevalier added.

Adeline Jenner, a regional health officer, added: “It’s important that the participants understand that their behaviour in the next few days can save lives. The test will not be held against them.”

Eastern France has been one of the areas worst affected by Covid-19 and remains “red” on France’s national virus map that designates regions where the virus is still actively circulating. At the height of the health emergency, the authorities were transferring patients from the Grand East region’s overwhelmed hospitals to neighbouring countries including Germany and by specially adapted TGVs to areas with fewer patients.

A second football match was held on Tuesday evening in Grigny in the Île-de-France region, which is also red on the coronavirus map. Police said there were about 300 spectators but officers did not have the means to break up the game. – Guardian