More than 300 arrested in Hong Kong amid renewed protests 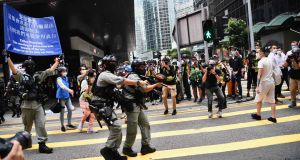 Hong Kong riot police issue a warning as they try to clear away people gathered in the Central district of Hong Kong on Wednesday. Photograph: Anthony Wallace/AFP via Getty Images

Hong Kong riot police fired pepper-ball rounds and arrested more than 300 people on Wednesday, as thousands of protesters took to the streets to oppose new Beijing-backed laws they fear will dramatically curtail the city’s freedoms.

Police cordoned off the city’s legislature with water-filled barriers, barricaded roads and walkways, and conducted widespread stop-and-search inspections across the city in a bid to disrupt a planned rally.

Most of the arrests were for participating in an unauthorised assembly, police said. Livestreamed images showed that many of those detained appeared to be simply shouting slogans, with a number of them teenagers in school uniform. Some of those arrested were office workers who had joined the protest on their lunch break.

Amnesty International said the police had made heavy-handed arrests during the peaceful protest and condemned the excessive use of force.

The “excessive and indiscriminate use of force by the police to disperse protesters once again exposes the authorities’ utter disregard for human rights on the streets of Hong Kong”, said Joshua Rosenzweig, Amnesty International’s deputy director for East and South-East Asia.

“Mass arrests in entirely peaceful assemblies show that the Hong Kong government is targeting anyone exercising their right to freedom of expression,” he said.

Public gatherings of more than eight people are banned under coronavirus social distancing restrictions, although the city has brought the outbreak under control.

Requests by groups for permits to hold protest marches and rallies have been denied in recent months, with authorities citing the pandemic and the disruption caused by the seven months of pro-democracy protests last year.

Protesters came out on Wednesday to condemn recent legal moves initiated by Beijing. They had planned to surround the legislative council where the territory’s legislators were debating a law that will criminalise insults to the Chinese national anthem, an offence carrying a penalty of up to three years in prison.

In another recent legal move that has shocked the pro-democracy movement, Beijing announced last week it would circumvent Hong Kong’s political system and impose by decree a new national security law, which will target secessionist activities, subversion and foreign infiltration.

Martin Lee, an 81-year-old prominent pro-democracy figure, said the move to impose a sweeping national security law was part of Beijing’s strategy to rigidly control the territory. “I call this the rape of Hong Kong. They are raping the Hong Kong system,” he told Bloomberg TV in an interview on Wednesday.

Many of the protesters on Wednesday were shouting new slogans, including “Hong Kong independence, the only way out!”

At the protests over the past year the majority of the chants called for more democracy and freedoms, but steered away from calls for independence. The change suggests Beijing’s intensifying crackdown is hardening positions and shifting attitudes towards Hong Kong independence.

As tensions in the city escalate, Taiwan’s president Tsai Ing-wen said on Wednesday her government would develop a humanitarian “action plan” to support the pro-democracy movement and lend assistance to people who needed to flee from Hong Kong.

US president Donald Trump criticised the proposed legislation this week and said he would soon announce a “very powerful” response to it.