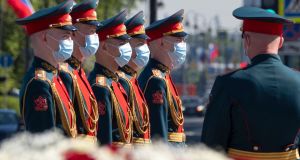 South Korea reported its highest number of new coronavirus infections in weeks on Wednesday and India reported another record single-day jump of more than 6,000 cases, as the pandemic expanded its grip across much of the globe.

Still, optimism over reopening economies from business shutdowns to fight the virus spurred a rally on Wall Street, even as the official US death toll approached 100,000.

Outbreaks are still climbing in much of the Americas, while many countries in Asia and much of Europe are making steady progress in containing the deadliest pandemic in a century.

Moscow’s mayor announced easing lockdown restrictions in the city on June 1st, citing the slowing of the Covid-19 outbreak in Russia’s capital.

Speaking at a teleconference with Russian president Vladimir Putin on Wednesday, mayor Sergei Sobyanin said people can take walks at designated times after remaining under a stay-at-home order since March 31st and he also announced plans to reopen non-food stores and services such as laundries, dry cleaners, and repair shops.

Moscow, with a total of 171,443 confirmed coronavirus cases, accounts for a little less than half of Russia’s caseload of 370,000 and has about 55 per cent of the country’s virus death toll.

Mr Sobyanin says the number of new infections in the city and hospital admissions has been going down in the past two weeks.

A French environmental group has found virus-era detritus littering the Mediterranean floor near the French Riviera resort of Antibes and is trying to raise awareness and clean it up.

Video shot by the group Operation Clean Sea last week shows scattered masks and gloves on the seabed, among beer cans, cigarette butts and other trash.

The group shared the images online as France and other countries gradually reopen their beaches to warn that it could worsen pollution problems in the Mediterranean.

A local legislator has proposed stiffening fines for littering.

Cyprus is pledging to cover costs for anyone testing positive for the coronavirus while vacationing in the east Mediterranean island nation.

The Cypriot government says it will cover lodging, food, drink and medication for Covid-19 patients and their families. Patients will only have to pay for the taxi ride to the airport and the flight back home.

A 100-bed hospital will cater exclusively to foreign travellers who test positive. Some 112 intensive care units equipped with 200 respirators will be reserved for critically ill patients.

A 500-room “quarantine-hotel” will host exclusively patients’ family members and other close contacts.

The pledge came in a five-page letter sent to governments, airlines and tour operators outlining strict health and hygiene protocols that Cyprus is enacting to woo visitors to the tourism-reliant country.

Nevada governor Steve Sisolak has announced that he will allow casinos to reopen on June 4, welcoming tourists to return to the glitzy gambling mecca of Las Vegas.

The Democratic governor told reporters that Nevada will welcome visitors from across the country to come to Las Vegas and have a good time.

Mr Sisolak closed the casinos 10 weeks ago as part of a broad shutdown to slow the spread of the coronavirus.

The casinos typically draw millions of tourists to Las Vegas and power the state’s economy. The governor said he would also allow in-person religious services of up to 50 people starting on Friday.

In South Korea, 40 newly confirmed cases – the biggest daily jump in nearly 50 days – raised alarm as millions of children were returning to school.

All but four of the new cases were in the densely populated Seoul region, where officials are scrambling to stop transmissions linked to nightclubs, karaoke rooms and an e-commerce warehouse.

South Korea has reported 269 deaths and 11,265 cases, after managing to contain a severe earlier outbreak.

Authorities were testing 3,600 employees of a local e-commerce giant, Coupang, after discovering dozens of coronavirus infections linked to workers at the company’s warehouse near Seoul.

India saw another record single-day jump, reporting 6,387 new cases on Wednesday, as the government prepared new guidelines for the next phase of a two-month-old national lockdown that is due to end on Sunday.

In the Americas, from Mexico to Chile, health officials were reporting surging coronavirus cases and overwhelmed hospitals.

Its daily death toll is approaching that of the US, at about 620.

Brazil currently leads in daily deaths with more than 800.

Authorities in Chile said their intensive care units were near full capacity, with about 4,000 new cases being confirmed daily.

A US travel ban took effect on Tuesday for foreigners coming from Brazil, where president Jair Bolsonaro has raged against state and local leaders enforcing stay-at-home measures despite warnings that the outbreak is deepening.

Brazil has about 375,000 coronavirus infections – second only to the 1.6 million cases in the US – and has counted over 23,000 deaths, but many fear Brazil’s true toll is much higher.

Worldwide, the virus has infected nearly 5.6 million people and killed more than 350,000, according to a tally by Johns Hopkins University.

Europe has recorded about 170,000 deaths, while the US has reported more than 99,000 in a span of less than four months, more than the number of Americans killed in the Vietnam and Korean wars combined.

The true death toll is widely believed to be significantly higher, with experts saying many victims died of the virus without ever being tested for it. – AP