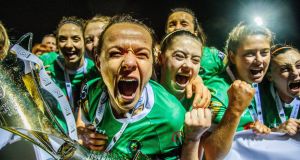 When Áine O’Gorman was Peamount United’s FAI Cup final heroine in 2010, she didn’t think the wait would be so long for another Blue Riband.

O’Gorman was a sprightly 21-year-old striker back then, her hat-trick in the 4-2 victory at Tolka Park over against Salthill Devon displaying her predatory instincts.

The showpiece day has since moved to Lansdowne Road and she has been on the losing side three times, albeit once injured watching from the bench.

Two of those defeats were as a UCD Waves player and last year’s loss was back with her beloved Peamount. On Sunday, the repeat final against Wexford Youth offers an opportunity for redemption.

“Hopefully, it’s third time lucky for me at Lansdowne Road,” said the 30-year-old.

“The pitch here is much bigger than most and some of us struggled in last year’s final.

“I think we can adapt to the occasion and we’re in a better place as a team all-round. People were expecting big things from us last year but we’d a lot of new players. There’s now more a sense of togetherness and team spirit about us.”

The team from South County Dublin have backed that up with a first league title since 2012 and, with it, entry into the Uefa Champions League.

Standards on the domestic scene, however, continued to be variable, a peril unlikely to be rectified anytime soon given the financial problems at the Football Association of Ireland.

Still, the crisis at the governing body had produced some reforms to allow prominent players like herself have a place on the new committees.

O’Gorman was a driving force in the enforced strike in 2017 by the Ireland players in pursuit of basic working conditions.

It is one of the highlights she recalls most fondly over an international career that ended last year on the occasion of her 100th cap against Norway.

“Clubs need more investment and resources from the FAI,” said the Wicklow native.

“The big gap in the league has to be addressed because we’re going from beating a team 9-0 to facing the better sides like Wexford and Shelbourne.

“That’s no way to be preparing for the next game and the heavy defeat is demoralising for the opposition.

“I’ve been proposed by the Players Football Association of Ireland (PFAI) for the FAI’s high-performance committee.

“It has to be a good thing to have people on committees from different backgrounds and the input of players who’ve come through the system is invaluable.”

The boardroom battles will have to wait while O’Gorman attempts to bookend her career with another FAI Cup.

1 The Offload: Saracens prove Pro14 is not fit for purpose
2 Ulster GAA issue warning after Tyrone SFC final pitch invasion
3 Born to ride, born to win: Sam Bennett, the making of a green machine
4 Ken Early: Kai Havertz already a conundrum for cautious Chelsea
5 Devastating Leinster defeat has a distinctly Anglo feel to it
Real news has value SUBSCRIBE
Crossword Get access to over 6,000 interactive crosswords