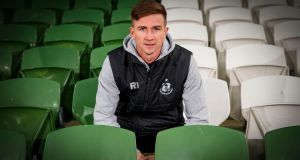 Shamrock Rovers’ Ronan Finn: “As long as you are in the team, that’s all you really care about.” Photograph: Oisin Keniry/Inpho

Ronan Finn says he remembers the moment it hit home just how different things were going to be for him at Shamrock Rovers. It was as he took to the pitch for a pre-season friendly against Waterford back in 2011, and he suddenly sensed the scale of supporters’ expectations.

They were, he says, a step up on what he had experienced at either UCD or Sporting Fingal despite the decidedly low key nature of the game. Eight years on he is under no illusions regarding what is required of the entire team on Sunday afternoon.

If there is pressure, and he says there is, plenty of it, the Dubliner does not show it. Finn is in fine fettle as he discusses the occasion these game are, his place in the team, and the stick he is likely to be subjected to by Dundalk fans still peeved that he went back to Dublin in2017.

“The way I look at it is you take it as a compliment,” he says with his trademark grin. “If they don’t give you stick that means they didn’t care that you were there. The fact that they give you a bit, it means that it hurt that I left.

“Our league is probably slightly different to other leagues around Europe in that it’s smaller and players maybe tend to move clubs more. Maybe a player in Belgium will move to Germany or Poland. In our league it’s internal. That’s the way it is. I’m back now with Rovers and we are really building the last couple of seasons. I think there is an opportunity here on Sunday to showcase that.”

The sense that Rovers are a coming force is acknowledged on all sides, and whether they win or not they will be widely expected to mount a more sustained challenge in the league next season. Yet winning the cup and getting that 32-year-old monkey of their backs in the FAI Cup will surely bolster confidence as they square up to Vinny Perth’s men again at the start of 2020.

Finn, who was on both ends of it in cup finals during his brief spell at Dundalk, certainly believes the club has the ability to do it.

“The difference since I’ve come back in 2017 to now is huge in terms of quality in the dressing room. Over the last couple of years we’ve been building towards this. The group is in a good place, we’ve finished the season strong, and the manager will have a headache picking the team on Sunday. That’s what you want.

“In terms of individual technical ability, people like Jack [Byrne] and people like Graham [Burke] can do things that I’ve probably never seen an individual player do. That’s real technical seeing a pass that no one else can see. Graham shooting from 25 yards, consistently putting it past the keeper, that individual talent is clearly evident.”

Such is the strength of Stephen Bradley’s options that Finn, widely acknowledged to be one of the league’s most accomplished players, struggles these days to nail down a place in his preferred area of central midfield. He comes across as the model pro as he talks about being deployed as a wing back through much of this campaign, a role he has performance really well, but can’t completely disguise his frustration at not being where he feels most at home and believes he can exert most influence.

“Listen, I’m a midfielder. I have played midfield 14 years, so naturally you want to play in the middle. I suppose the manager has maybe looked at me and said, ‘Ronan, we need you to play here’. As a player you just say ‘no problem’. You can maybe fight your corner a wee bit, but at the end of the day he is the manager. As long as you are in the team, that’s all you really care about.”

If he starts there on Sunday and the team wins then clearly it will have been a good day for all concerned, but then Finn readily acknowledges that the entirety of Rovers’ season will be looked back upon through the prism of this one game.

“I think that’s fair to say. Football is like that. Maybe that’s a fair comment. If you are going to be critical [of the club’s general position and progress] you need silverware. We know that, we are building towards that. So, yeah, potentially we win the cup on Sunday you go, ‘right, we finished second, we won the cup, let’s build, and let’s keep going for next season’.”

And if you don’t?

“I’m not thinking like that,” he says still smiling, but also deadly serious.

1 Awarding of 2023 Rugby World Cup to France part of Laporte investigation
2 Suarez’ Italian language exam rigged according to prosecutors
3 Trump in the rough over playing golf and US Covid-19 fatalities
4 What next for green jersey hero Sam Bennett after toughest of Tours?
5 The Offload: Saracens prove Pro14 is not fit for purpose
Real news has value SUBSCRIBE
Crossword Get access to over 6,000 interactive crosswords