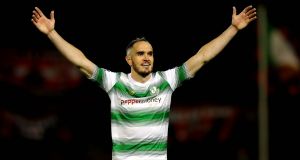 Joey O’Brien celebrates the FAI Cup semi-final victory over Bohemians at Dalymount park. “It was the only [Irish] club I was ever going to play for.” Photograph: Ryan byrne/Inpho

Cup final press days tend to upbeat affairs but things seem to have taken a slightly strange detour at the Shamrock Rovers one when Joey O’Brien finds himself trying to remember which Ireland games at the Aviva he watched from the dugout during his international days.

It all starts with a harmless enquiry about whether he has played there before but ends up coming back to the injury issues that marred the career of one of the most talented Irish players of his generation.

“If I want to look back on my career,” says the Dubliner coolly at one point, “there’s some good stuff that I achieved.”

There were certainly some very good seasons at Bolton and West Ham where Sam Allardyce put a lot faith in the now 33-year-old and was generally repaid with interest.

There were injuries too, though, most obviously a knee problem that required more than one operation then lesser hamstring, shoulder and calf ones that cost extended chunks of time on the sidelines.

It was the calf problem that essentially prompted his move home with the timing (he was out of contract at West Ham) contributing, one presumes, to the club not handing him a new deal. Manager Slaven Bilic had suggested he would get one then never took the time or trouble to explain the change of heart.

Ultimately, he is grateful to Allardyce for “seeing something” in him as a teenager and handing him his first-team debut at Bolton and philosophical about the lack of attractive options after having worked so hard to get fit again in 2016.

“It’s like anything,” he says, “you always feel like you can still do it but it’s all about opinions. By that time, people’s opinions about me as a player changed. Maybe they thought, ‘he’s finished at that level’. The opportunity wasn’t there, so I had to forget about it and move on.”

“My wife [Joanne] was about to give birth [to twins], so I wasn’t going to go up and down England playing lower leagues. It just wasn’t for me. I’d done it and I had great moments at Sheffield Wednesday playing League One and stuff like that, but I wanted to come back here and raise my family here and play with Rovers. That had more of an appeal to me than going to play for a random northwest club.”

The Rovers thing was very real with O’Brien. His father “was a Pat’s man” and the pair of them used to go to games together but, he says, his brothers and cousins all supported the Hoops and, throughout his career, it was his intention to end up back at the club he followed.

His impact has been profound. His ability and experience are obvious from the stands but players like Lee Grace talk about the way he talks to them, offering guidance, encouragement and, as O’Brien puts it himself, the occasional “rocket” out on the pitch.

The Dubliner recalls playing alongside Andy O’Brien on his senior international debut, the 3-0 win over Sweden that marked the start of Steve Staunton’s time in charge; it should have been the first of many caps but in the end he got just five for one reason or another. Still, his experience in that game made a lasting impact.

“After the game I thought ‘Jesus, man, I need to bring this into my game’. Especially in that position, centre-half or full-back, because you can see the whole game in front of you. You can talk and give shouts to people.

“I found it was a huge benefit to me and hoped other players might benefit from it. Since then I’ve always used it as a tool in playing.”

Like Grace, who observes that: “Joey says the right things at the right times, he seems to always be in the right positions,” Rovers boss, Stephen Bradley, clearly sees the benefits of having him about.

“He’s an unbelievable character,” he says, “a proper leader. I think when you see him on the pitch for us, he calms us down, he settles us down and we make better decisions all around when Joey is on the pitch.”

Injuries have been an issue again for the defender this season but Bradley points to the fact that he has played through almost all of them.

You sense that O’Brien, who comes across as hugely likeable despite being spiky at times, might not entirely welcome being defined like that but the strength of character he possesses is certainly apparent.

He talks briefly at one stage about his Catholic faith, about seeking out a church in order to go to Mass wherever he has been as a player and laughs at the memory of sitting towards the back of one in Newcastle in his West Ham days as the Irish priest he had spoken with beforehand good-naturedly brought his presence to the attention of the large Geordie congregation on matchday.

He seems to find the notion that observing his faith, which clearly extends to more than weekly church-going, might have been challenging as a young player at a modern day Premier League club slightly ridiculous.

“I grew up with religion being a big part of my life, I took great comfort in that I was away from family and friends. It kept me centred, kept me close to my family, I suppose.

“It’s going to be there until the day I die,” he continues. “Football won’t, family will. I was brought up with faith and I kept it going over there myself. I raise my own family in it now.”

And so his match day routine will be a little different to that of some of the other squad members on Sunday. Come kick-off time, though, he will be at least as focused as any of the club’s players on ending Rovers’ 32 year-old run with a cup success.

He knows better than most how that long wait has felt to the fans but prefers to see this game as part of a future that looks really promising for Rovers. He hopes to be a part of it well beyond his playing days, whenever they end, most likely as a coach and mentor to kids who show the promise required to pursue the same path he did. For now, though, there is some more to be done as a player.