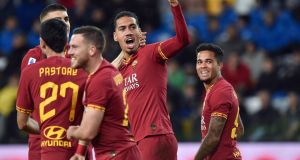 Roma’s Chris Smalling celebrates with his teammates after scoring against Udinese on Wednesday. Photo: Franco Debernardi/EPA

Roma are ready to make a €15m offer to Manchester United for Chris Smalling after the defender’s impressive start to his loan spell at the Serie A club.

The 29-year-old joined Roma for a season-long loan on August 30th and has been a revelation so far, securing a regular starting place in Paulo Fonseca’s starting XI and scoring his first goal for the club in the 4-0 win against Udinese on Wednesday night.

The former England defender has been with Manchester United since 2010 and has a contract until 2022 but is keen to join Roma permanently after the smooth start to his spell in the Italian capital.

Roma are delighted with his impact so far and are already ready to make an offer to United to buy him outright. The club are preparing a €15m offer to be sent to Old Trafford next week, consisting of €12m up front and €3m in add-ons. They have already paid the Premier League club €3m for the loan this season.

Roma have a five-year contract ready to offer to the player and will now wait to see if Manchester United accept their bid. Smalling had fallen behind Harry Maguire and Victor Lindelöf in the pecking order at Old Trafford and was battling with Marcos Rojo and Phil Jones to be the third-choice centre-back before going out on loan. – Guardian