FAI turns down second invitation to appear before Oireachtas committee

Association says it is focused on restructuring its finances and management 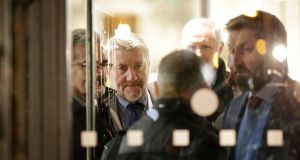 FAI board members leaving after their meeting with Minister for Sport Shane Ross at the Dáil on Tuesday evening.. Photograph: Nick Bradshaw:The Irish Times

The Football Association of Ireland has turned down a second invitation to appear before the Oireachtas Comittee on Transport, Tourism and Sport.

In a letter to the committee, sent on Tuesday, the association said it is focused on the financial restructuring of the organisation and the appointment of an independent chairperson and three independent directors.

“At this moment in time, this requires the undivided attention of the board of the bssociation and key management, it is for this reason that the association is regretfully not in a position to appear before the joint committee. ”

It is the second time in as many weeks that the FAI has turned down an invitation by the committee.

“As soon as the measures outlined above are complete, the board will welcome the opportunity to appear before the committee at a time that suits your members. The board of the FAI thanks the committee for its patience and understanding at this critical juncture for Irish football,” wrote Rea Walshe, the FAI’s company secretary.

It follows a failed attempt by the association to secure a multi-million euro financial support package from the Government, either in the form of a guarantee for its debts or a direct cash injection, which took place on Monday night.

The organisation requested support amounting to more than €10 million during a meeting with Minister for Sport Shane Ross, but that was rejected. Mr Ross is expected to brief the committee tomorrow on his talks with the organisation, as well as efforts to find a way to supply funding to the grassroots game without involving the FAI itself.

Sport Ireland chief executive John Treacy and president Kieran Mulvey are also due before the committee.

Fergus O’Dowd, the chair of the committee, said his immediate concern was for jobs at the FAI, and a timetable for the appointment of new directors, including a new chief executive. “Funding is a major concern and Uefa needs to be involved,” he said. Following the talks last night, Mr Ross said he would be writing to Uefa about the future of the FAI.

“A transformation such as that undergone by the Olympic Federation of Ireland is essential” at the FAI, Mr O’Dowd said.