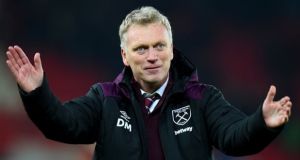 David Moyes took charge of West Ham in November 2017 but left at the end of that season. Photograph: Tony Marshall/Getty Images

David Moyes has made an unlikely return to West Ham, charged with the task of saving the club from relegation for the second time in three seasons. He has been given an 18-month contract and will take charge on Monday following the sacking of Manuel Pellegrini.

Pellegrini was dismissed 90 minutes after the 2-1 home defeat by Leicester on Saturday, 18 months after he replaced Moyes at the London Stadium. He had overseen an awful run and had been under pressure before defeat by a much-rotated Leicester side proved the final straw for the West Ham owners, David Gold and David Sullivan.

Mario Husillos, a Pellegrini ally, has also left his role as the director of football after a series of mistakes in the transfer market.

West Ham are a point above the bottom three and their need for a quick fix means they did not target managers at other clubs, ruling out moves for Bournemouth’s Eddie Howe, Burnley’s Sean Dyche and Dalian Yifang’s Rafael Benítez.

Moyes, who was linked with Everton before Carlo Ancelotti’s appointment at Goodison Park, has been out of work since leaving West Ham after keeping them up in the 2017-18 season. It was hoped he would finalise a deal to return on a long-term basis on Sunday, meaning he will be in charge for Wednesday’s crucial home game against Bournemouth.

The former Everton manager did not leave West Ham on good terms. He was hired on an initial six-month contract after Slaven Bilic was fired in November 2017 and was tasked with keeping West Ham in the Premier League.

While he did that with two games to spare, supporters were unhappy with the side’s style of play and Moyes, who struggled to convince the board he was worthy of a long-term deal, left after growing aggrieved at his treatment. West Ham began a search for a “high-calibre figure” and Pellegrini was hired on a three-year contract worth £7m a year.

Moyes does not hold a grudge against West Ham and he can count on support from within the boardroom. Gold, who is a big fan, thought it was a mistake to let Moyes leave in the first place and has been pushing for a reunion for a while. The problem in 2018 was that Sullivan, who holds far more power than Gold, had a different vision to Moyes and wanted a manager who played attractive football and could attract exciting players.

Yet it has not worked out for Pellegrini, whose dismissal came after a run of nine defeats in 13 league matches.

While Moyes’s return is unlikely to sit well with fans who have grown disenchanted since the move to the London Stadium, he can point to how he revived Marko Arnautovic during his first spell, not to mention the fact he was working with a limited and unbalanced squad.

West Ham are crying out for a manager to organise a leaky defence and they need a more solid structure away from the pitch. They need a manager with a record of building sides; someone to give them stability. Before the end of his first spell Moyes had plans to emulate his successes at Everton by turning West Ham into a top-eight club. He spoke about the need for better training facilities and pushed for greater control over signings. He wanted the club to be cannier in the transfer market.

Moyes, who could ask Alan Irvine, Chris Woods and Stuart Pearce to be part of his backroom staff, inherits a badly underperforming squad. West Ham tried to be patient with Pellegrini, especially after he lost Lukasz Fabianski to a serious hip injury in September, but successive defeats against Crystal Palace and Leicester over Christmas convinced the club to act.

The loss of Fabianski, who returned in goal against Leicester, proved calamitous. The goalkeeper’s deputy, Roberto Jiménez, put in a string of awful displays, destroying the team’s confidence and raising doubts over Pellegrini’s judgment. The signing of Roberto on a free transfer last summer was down to Pellegrini, who was handed £100m to spend in the summer of 2018, and Husillos.

Husillos, who was Pellegrini’s pick as director of football rather than that of the club, has been under pressure for a while. Roberto is not the only recent signing who has flopped. Andriy Yarmolenko, a £17m buy from Borussia Dortmund, is up for sale. Carlos Sánchez and Albian Ajeti have also disappointed, Sébastien Haller has struggled up front since his £45m move from Eintracht Frankfurt last summer and Pellegrini’s insistence on signing Jack Wilshere on a free transfer has backfired. Wilshere is rarely fit, leaving West Ham’s ponderous midfield short of options. – Guardian